If We Have Forgotten 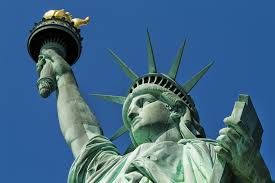 If there was a thing I thought growing up, it was that the US was great. The great melting pot. The leader of the free world.  A nation of laws, not men. A free country. One nation, indivisible, with Liberty and Justice for all. And I continued to believe it as an adult, for old time's sake, even when the sins of a nation were uncovered through greater study--mostly good. Aspiring to be great. Freer than most.

Our unique position, historically, has been called "American Exceptionalism". The American cradle story we ought to know is that our country exists on paper--it is not any particular religion or ethnicity that informs our uniqueness,  but the documents that inform our law and our values. We have made sacred texts of the Declaration of Independence and the Constitution because they represent the formation of the American viewpoint. The expansion of the US meant that over time, our borders changed, and the influx of immigrants over the years meant our ethnic and religious composition also changed, but what was not called into doubt was that we made Americans of our immigrants and they became ours. This happened imperfectly. But it's been going on for years.

Later on, American Exceptionalism meant something about our strength as a nation and our military power--post-WW2 and through the Cold War and beyond. This in part can be viewed as a product of the denouement of WW2--the fall of the Nazis and the liberation of the camps, and the shock and awe of the bombing of Hiroshima and Nagasaki. Divorced from the aspirational view of an arc of history bending towards justice, there was always the more pessimistic view of our collective trajectory--voiced by H.L. Mencken and Sinclair Lewis, that fascism could happen here--and I, steeped in liberal altruism, concurred.  It could happen here, wrapped in a flag, carrying a cross. Popular sentiment, that accepted slavery, segregation, know-nothings, bigotry against Catholics and Jews, Jim Crow, lynching, and so on, would betray our American ideals, because we aren't just aspirational about our exceptionalism, but are also always fucking it up.


Of course, our current President isn't saddled with my peculiar bias about American exceptionalism.  For him, "America first" doesn't seem to have anything to do with America being different or better, but with some vague idea of "winning".  Team America is just a Team. And maybe that is why his statement marking the International Holocaust Remembrance Day lacks any reference to Jews or anti-Semitism--he lacks historical perspective. (Or, because his image is so allied with the alt-right, it would have just been off-brand to mention it.) Also, because he has no historical perspective of our American exceptionalism, he chose this particular day to announce what amounts to a Muslim ban.

You could call it racist or insensitive or whatever. I would call it stupid--banning Muslims and showing favoritism to Christians is exactly what ISIS wants us to do. It's not a show of strength, but cowardice. And also, it is a unique cruelty to those who had hope. It doesn't make America great--it reminds of another time when we erred and chose to be small, and of the needless deaths that should haunt us to this day.  We can mouth "Never again"--but this is our opportunity to do the right thing, denied because of littleness and fear.

But whatever we might say of the Muslim ban, or anything at all about Trump's other immigration-related promises, in part, he is relying on lies. Refugees and migrants are not more likely to be terrorists, and for what it's worth, immigrants are not more likely to be criminals, despite Trump's inflamed rhetoric. He plans to track stories about immigrant crime, which sounds like it will be no more true than his racist narratives about inner-city (black) crime (which includes lying about my city of Philadelphia).  His propaganda is a dangerous trip: singling out people to scapegoat is possibly Bannon-influenced, but the starker, earlier comparison is hard to miss.

I just look at Trump, and wonder if he ever knew.
Posted by Vixen Strangely at 4:11 AM