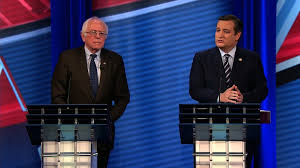 I know this is a weird post, because I'm freely admitting I didn't tune into the debate and wasn't interested, but I just want to weigh in on why--

I don't really understand the purpose of two people debating the ACA when one person is a staunch conservative against the principle of government-funded health care, and the other a socialist who believes that the government should go further. Instead of being a policy debate about the strict merits of the ACA as policy by two sitting US Senators, it feels like the debate would come to center on political philosophy and we would then just see two people talking past one another.  The fight over policies that ensure universal healthcare is only useful when we have two sides that view universal healthcare as an admirable and worthy goal.

But I don't think we do have that.  The current Republican argument about health care doesn't relate to actual people having coverage, but to a more vague "people having access" to coverage. But to use a simile, this "access" is like placing health insurance on a very high shelf out of the reach of many people, providing not even a footstool, and calling it "accessible" because it isn't under lock and key.

(It is, in this way, not much better than "school choice", where by choices, we mean several nice things you can't afford for your kids, some things in reach that are problematic, and the most widely available option not being really as good as it ought to be. Which isn't as great a choice, I would think, than everyone working to have one really great option that is inclusive and effective for every learner.)

I doubt this sort of thing actually changes minds, so much as serves as a pro-Bernie or pro-Ted thing depending upon the audience. A more meaningful thing should be a matter for all of congress.