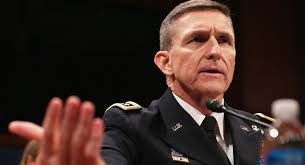 So, I was starting to save tabs to write a post on why Mike Flynn should absolutely be fired or resign, but then I saw my spouse off to bed (he gets up for work earlier than I do) and got a refill of my beverage, and found Twitter telling me that he had already resigned. Awkward! Not for me and my writing exercise about why Gen. Flynn had become toxic, but for the Trump spokesfolx, like Kellyanne Conway, who had just a bit ago assured us that Flynn had the full confidence of the President.

And maybe the President was still invested in Flynn, but Flynn felt it was time to go. Maybe Acting AG Sally Yates was exactly right in warning that Flynn was susceptible to blackmail by Russia. Maybe Russia's attempt at providing cover for Flynn wasn't going to hold up.

It's pretty obvious that Trump Administration already had built-in security issues, in no small part relating to their basic lack of appreciation for opsec. But Flynn himself seemed to have certain failings in appreciating what he needed to know to do the job, in addition to possibly being compromised by a foreign power.

It's good news for the Trump Administration, on one hand, that he removed himself and tried to minimize the damage in the press for his "team"--but on the other hand, his stepping down implies that there was a reason he wanted/needed to do so, and that there might be more behind the Trump/Putin connection than we already knew.

I think this should definitely continue to be investigated.