None of this Stuff is Normal 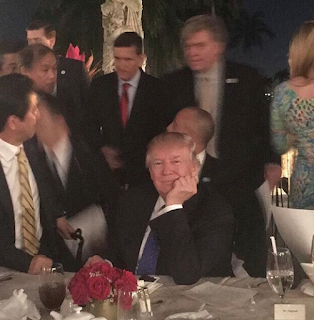 The above picture is Trump at Mar-A-Lago, where he received a call that North Korea had launched a ballistic missile. Although you could call the resort very exclusive (as in "pricey") I don't think you could actually call it "secure". As in, I don't know that it's actually ok that national security issues are mapped out in a place public enough that randos can take snaps of a curiously-composed CINC who seems cut-off from the flurry of discussion behind him-because a camera happens to be pointed in his direction.

This is fairly removed from a discussion one might have had about electronic communications occurring during the previous administration. This is not normal, and for an administration that already has engendered a fraught relationship with the intelligence community, openly flouting procedure is not going to be a good confidence-booster.

You'd think that Congress might offer some oversight--but no. Apparently, tax cuts for rich people and dismantling the social safety net have a lot more priority than complete confidence in the basic competence of the executive branch for GOP elected officials.

The result? I think Trump's basic unpopularity (although he and his supporters are loathe to admit or recognize it) could well rub off on certain House members--although 2018 seems such a long time from now. But in the short term, there may be economic indicators and other signs that all is not healthy in the US--let alone "great".  It's nonsensical when the "winner" of an election has to have his surrogates trot out in front of cameras and lie about voter fraud, and is so desperate for love he wants the press to cover his rows of supporters--when he was looking out at protesters (and somehow not noticing their "resist" signs).

There's a lot of weird going on. The only way for me to look at it is to point out: it is not normal. And the way it differs from normal is not good.
Posted by Vixen Strangely at 2:01 AM