WikiLeaks Sure Got Weird Recently 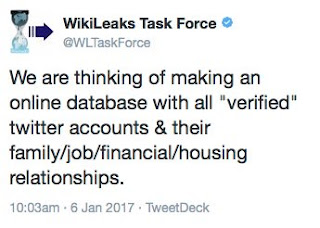 Um. I know. I just did a WikiLeaks post, and it's not like the org (By which I basically just mean Julian Assange, because, right now, is there anyone else but him? Inquiring minds and all that) is my regular bugbear. It's just that I've been wrong, haven't I? WikiLeaks had to have moved the needle a little. After all, Trump won. In retrospect, dirty tricks (that is what framing an information release selectively with the intent to distort could be construed as, right?) might have accounted for a little bit a lot.

But what does anyone make of a discussion about creating a database that starts from "verified" Twitter users to uncover a network of influence?  It doesn't seem like a nice social science experiment to determine who is a real macher on Twitter, and seems a bit more like being the thing they really want to disavow: 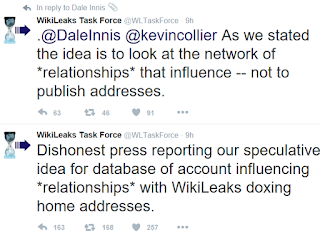 Yeah. So I'm pretty sure that if such a database is brought to fruition, with information made public about any number of people, their housing, their jobs, there will be a very sternly-worded disclaimer not to do bad things with this information, which is for very noble social science purposes only, and stop laughing, will you?

Snap diagnosis: Assange suffers from a profound lack of Vitamin D and needs to get out more.

Posted by Vixen Strangely at 1:02 AM

I sat there and believed it when people I respect on the far left called him a hero.