Trump Thinks This is About Him--Sad! 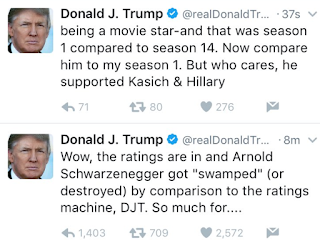 So, the funny thing about Donald Trump, President-Elect of the United States, slamming Arnold Schwarzenegger for low ratings for the television show, "The Celebrity Apprentice", is that Donald Trump is the executive producer of that show. Donald Trump, who will sit in the White House doing executive things for this country, had to slag the new host of this tv show he still makes money from, because...

I don't even know. He compared Schwarzenegger's first day to his own, quite utterly forgetting that the show was rather different when Trump started it, and that so was the cache of the Trump name, which still clings to the show entire.  Is he really so petty that he begrudges an actual practiced politician, Arnold Schwarzenegger, for his non-support of Himself as a candidate, any success in an enterprise from which they would mutually benefit? Does he need the ego-boost of comparison so badly?

It's hard to say (for the record, Schwarzenegger in return replied with civility and class) why Trump had to make his dig about the show he has on NBC, or even why he had to bitch about NBC having an exclusive regarding the news item of the IC report on the Russian hacking of the recent election. But bitch about it he did.

And after getting told the details? Still more bitching. Trump prefers to send out a message that there was no impact on the results of the election--because this is all about whether he was rightfully elected--has the "ratings". This could not possibly be, to his mind, an undermining of US government because if we would all just click our heels, we could start looking at Trumplandia as our home.

He actually described the focus on the Russian involvement as a "political witch hunt".  Like this thing Putin authorized was all about Trump and just about Trump, not our national security or the integrity of our elections. And like it was not somehow ironic for him to deflect from the focus on his own legitimacy as president-elect to talk about witch hunts, as if chants of "Lock her up" never flowed down from any podia at a Republican National Convention. Lock whom up now? Who looks like an ally of another nation? Hm?

I don't know if Trump really thinks presidenting is about "ratings" and misses all the bits where we are a democracy, and his job is defending our freedoms against outside treachery as well as inside.  He'll be taking an oath about it, of course.

Posted by Vixen Strangely at 1:44 AM

He's still just a little torn about the fact that an immigrant took his job.

Heh--I think it would kill him if Arnold was more popular as host than Himself. I also wonder if his popular vote loss weighs on his mind considerably. I can't determine if his denials regarding the Russian hack's influence is entirely about not having a constant asterisk marked on his win, or if there is something to the claims that it seems like Roger Stone, for example, if not other Trump associates, definitely coordinated with WikiLeaks, if not Putin.

I don't know if Trump really thinks presidenting is about "ratings" and misses all the bits where we are a democracy, and his job is defending our freedoms against outside treachery as well as inside. He'll be taking an oath about it, of course.

His first order of business will be dismantling democracy, and the Republicans will go along with the program and then will turn on Trump big league in order to install Pence in the White House. Then the real fun will begin, with a theocratic kleptocrat taking over the Mammon-worshiping kleptocrat's regime.

This country is boned... so boned.