Let's Pretend I Worry About WikiLeaks 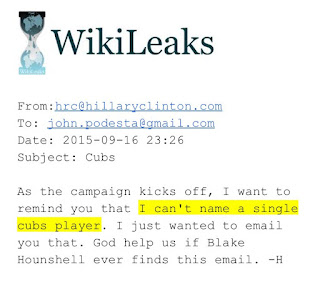 Goddamn it. As the Cubs enter the World Series, is it somehow possible that Secretary Clinton's lack of actually following the sport could set her back in the polls? You know, among die-hard Cubs fans? Has this bit of surreptitiously-gained intel suddenly made her a candidate less-favorable than Donald Trump, who undoubtedly is conversant with the names of sporting figures on account of his being a dude? Unless no one actually expects politicians to shout out sports except as a form of pandering because no duh.

This is basically what we've been getting from the trickle of WikiLeaks docs of late, which come out like they were obstructed by some kind of metaphorical swollen prostate, and say very little that especially damns Secretary Clinton. I don't know or care how Russia feels about this. Or if WikiLeaks is bothered that they are peddling duds. (Who let down whom, I wonder?)

Truth be told, Julian Assange is sort of like a Bond Villian, but without the recondite strategy. He sometimes pretends at being a threatening so and so because he's cornered and paranoid, but then he uses his skills to do this thing.

He's occasionally pretended he's about transparency but he isn't, exactly, And he seems to be pissing off his gallant hosts.  Do they worry, perhaps, that he might use their Wifi to eventually actually be unveiled about his anti-Semitisms? Or are they just trying to stave off an international incident because he seems to be trying to manipulate the US elections?