Can Trump Take up This Cause? 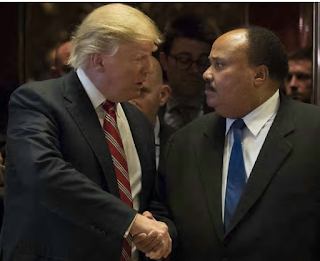 President-Elect Donald Trump may have missed visiting the African-American Museum (if he ever was going to go there), but he did meet with the son of Martin Luther King, Jr. This comes after making negative statements regarding civil rights icon Rep. John Lewis, who I believe was just responding quite emotionally and truthfully in calling Trump "illegitimate" from his perspective as a Clinton supporter and having heard out the intelligence regarding the level of Russian assistance to the Trump campaign. If any of my gentle readers are Trump supporters, imagine how you might respond if the shoe was on the other foot, and it was Clinton herself who was the beneficiary of foreign-influenced news-fuckery. Rep. Lewis's outrage makes a lot of sense to me. It is how I feel, too. Trump came by his win under dodgy circumstances, and from here on out, his respect needs to be earned by showing he can relate to all his citizens.

All of these things have nothing to do with Trump's current cabinet choices or many of his stated policies. I don't think he has it in him, and while I know he is accepting people to "listen to", I don't even know for sure what he hears when they speak. I'd like it if I thought he would work with minority or marginalized populations in the US, but since he built his campaign on demonizing those exact people, I just doubt it.
Posted by Vixen Strangely at 11:36 PM