This Russia/Trump/Comey Thing Bugs Me 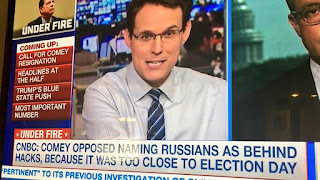 On Friday, legislators were angered by FBI Director Jim Comey's lack of candor regarding his agency's investigation into the connection between the Trump campaign and the Russian hack ops waged against the DNC and John Podesta in a closed-door meeting. It's one thing that he was cagey about what information he had in a public venue, but it's a bit something else to be less than forthcoming in that environment. This has raised questions about whether Comey ought to really resign for showing a double standard, having offered a kind of "October Surprise" in his openness to discussing FBI workings regarding Hillary Clinton, but a tendency to not even pretend to be half-interested in the real concerns regarding Donald Trump. The concerns raised about this lack of proper investigation lead to some further questioning of President-Elect Trump's legitimacy.

What bothers me about this is the report that the former MI6 agent who had gathered the information in the dossier was reportedly agitated that the FBI had not been acting on the information provided immediately. This sort of makes me wonder if the agency experienced a kind of institutional "slow-down" with respects to looking seriously into a Republican candidate's very real (or at least, plausible and serious) corruption, while still flogging Democratic candidate's Clinton's (despite Rep. Chaffetz's burblings) dead letter.

It bothers me because it implies that our own institutions aren't as good or fair as they ought to be. It's disturbing because some of the information is not just plausible but probable, and the sources of the information aren't that hard to get at. It bothers me because we now have agencies globally trying to research what dirt might be had on our President-elect, and I'm pretty sure there's a lot of it, just based on very public information like the Howard Stern radio program or TMZ, or the business pages of any good newspaper. You really don't have to look that hard to find evidence of "Trump + debt" or "Trump + womanizing". There is plenty of cringe-worthy data right out in the open.

But the results of that compromise are hard to get around--imagine US IC warning our allies, like Israel, that maybe they don't want to share information with Trump for fear it will spread from Russia to Iran.  Imagine this subhead from The Times: "Britain fears leak of its secrets to Moscow." Since Trump's first moves seem to be to meet with Putin, and to, as Russian Deputy Prime Minister Igor Shuvalov predicted, end sanctions, what else could anyone think, but that he's turned?

Which isn't even to say this connection is for real, although the Trump team hasn't tried hard enough to make it look otherwise. (Gen. Flynn, by the way, is just not the right guy for any position if Trump wants to do away with allegations of Russian coziness. ) It's that once the FBI had something to work with, they could have worked at either finding out he had indeed connections, or clearing him if he did not, whatever the case might be. We'd know for sure. Trump wouldn't be going into this inauguration under a cloud--that extends beyond our borders, but affects his administration's dealing with any other government.

That, right there, is the real price of a dereliction of duty--it's not just "What if Trump is guilty of colluding with a foreign power to win his election?" It's "What if Trump isn't actually guilty of that thing, but we don't know yet because the FBI didn't work on answering it?" I have been covering Trump's Russian connections and the possibility that the hack was for his benefit as a serious thing since July, but only because I had no research that told me different from trusted professionals. (And I continue to lean "pro-Trump compromised", based on all the circumstantial things. Also I hate every cabinet pick and most policy positions. So there.)

I'm glad that there is interest in the Senate in pursuing an inquiry into this--but I'd have liked the relevant info to have been available sooner. This isn't about Comey's reputation or partiality--it's a damn competence issue. Did Trump and Russia and WikiLeaks not look collusive as all hell? And how big a stick had to hit the FBI Director in the head before he was arsed to think about it?

Posted by Vixen Strangely at 12:27 AM