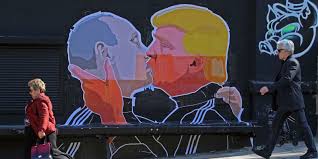 There is a certain surrealism to Russian President Vladimir Putin's defense of Donald Trump against the claims that Himself, the Donald, has been put in a difficult position due to kompromat that most probably does involve Russian call girls. Who are the best call girls. Putin argues: would it not be ridiculous for a man like Donald Trump, who has been with some of the world's most glamorous women (or lied about being with them, as he did about Carla Bruni) and who is married to an absolutely stunning woman, to have hired girls perform for him? Would that not be really weird? Sick, right?

Well, yeah. Thanks for including the details of the most lurid bits of the alleged smear in the defense, Vladi. But since it looks like the dossier was compiled by a private investigator (if former foreign intelligence agent) on behalf of a GOP candidate for oppo--this could hardly be construed as a case of the Obama Administration doing anything to delegitimize Trump. On the contrary, I think Obama and his immediate circle have tried to be appropriately available and gracious to the incoming Trump folks.  Also, the general picture about Russian interference is as old as early last summer, and doesn't seem to have Obama fingerprints in the placement of that story.

Providing a denial is as good as half-admitting to a confirmation of all the collusion. Providing a denial that makes it look like Trump is the worst human if any of it was proven correct is also priceless. And an especially great mind-fuck treatment in the event that all the blackmail tea gets spilled before Putin gets to enjoy any of it--so that he loses his investment in Trump but saves face by letting it be understood, Trump was the idiot who compromised himself.

Leaving us with a President who is still delegitimized--not by the Russian hack/WikiLeaks stuff. But because Putin just told us Trump, too, is dispensable. But for the moment, merely compromised.

Posted by Vixen Strangely at 12:20 AM