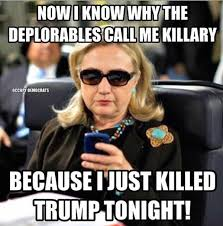 There is seriously a part of me that feels my ass got dropped in the wrong timeline. (Maybe the darkest timeline.) In the world I thought I was living in: Trump got put up by the RNC as a joke-ass candidate to clown Hillary Clinton and was supposed to lose while costing her many valuable "face" coupons redeemable wherever GOP fucks are served. Thereby allowing a Clinton presidency, wherein the GOP gave exactly zero fucks and was adversarial as hell--a universe I totally was ready for. But this is not the universe I lived in.

(The runner-up universe I was ready for had Bernie Sanders putting a boot in Jeb's ass, FWIW.)

But it just so happens that in former years I have been able to pull my year together with some kind of style. My 2015 Year in Review was absurdly detailed. My 2014 was short but sweet. My 2013 made some kind of sense.

This year didn't make any kind of sense. But I think the overarching theme of my blog was "OMG we have a serious capable human versus a catastrophe!"

And then the catastrophe won. So much for prognostications.

I didn't blog as much about the environment in 2016 as in previous years, but with a Trump admin I figure I'm bound to. Also the class war. I feel like there will be more opportunities to write "class war" posts.

Maybe next year I will have a blog that lends itself better to recapping. But I now understand you just can't tell what any year will necessarily entail. And while I wish us all peace and prosperity in the coming year, I no longer know this is the thing we'll get.

Posted by Vixen Strangely at 1:49 AM

Yeah, I hear ya. I usually do a 'Best of' end of year piece, but nothing feels particularly good at this point. As that noted chronicler of world events, Meatloaf, famously said:

Here's where I'm looking for some fun and schadenfreude. The Republican's Senate majority is hair thin, and some of those guys (think McCain and Graham, for example) really don't think very highly of him. Because of that, McConnell won't be able to nuke the filibuster, and some of the Republican infighting will be quite vicious and destructive.

Much of this will be darkly hilarious...

Hi Vixen, and Mikey too,
Here's wishing you both a very Happy New Year.

I've seen a lot of ink on this subject, but little of interest. I have seen some articles in connection with the Frankfurt School that were interesting, though wrongheaded.

The gist is sort of like this. The only way you can achieve massive cultural change is through revolution. However, revolution only works in a peasant society. In a sophisticated society such as ours there is not universal anger or antagonism, and as a consequence many people are happy enough to remain where they are. Naturally, you don't get a revolution out of a fairly complacent population.

So the Frankfurt School discusses another method that has to do with what they like to call cultural hegemony. The idea is that in our kind of society the only way you can control the ballot box is by controlling the culture. So in a drip-by-drip fashion the Left seeks to control the culture through the news media, show business in a process of redefining cultural norms. So then the idea is that, having controlled the culture, people have been influenced to vote for politicians who also support the idea of Marxist cultural hegemony even if Marxism has never been mentioned.

So accordingly this has been in the works for about 60 years and for a long time it has looked like this redefinition of what America is and what it stands for has been gradually changed.

However, the fly in the ointment is now in the fact that overwhelmingly the American public finally had a candidate who had the temerity to actually address real issues. A landslide occurred, and he will be our next president.

Ergo the experiment with cultural hegemony did not work. Furthermore, in the process of leftist collapse the news media have been discredited. (They have no one to blame but themselves.) So now the institution that the Frankfurt School believed to be primary in leading the cultural change has been entirely dismissed because of the revelations regarding their lies and spin. No one believes them anymore, and they are not going to start again anytime soon.

This adds up to a theory (like other Marxist theories) that has simply been disproved. It is not a theory that has worked in practice in the USA.

The article I read suggested that the cultural left will try again and again to push the same old id politics and socialism, but to no avail. The magic spell has been broken and credibility destroyed. So somewhere perhaps decades from now the Left will once again realize that they have to start being democrats again and stop basing their mode l on the idea that America is in the midst of a class struggle. And when they start being democrats again rather than a temporary phase originated out of the 1960s they will start winning elections again as American Democrats who are not trying to change culture but who are part of the culture and wish to help the culture achieve the culture's hope and dreams.

I've called all this a new zeitgeist, and I suspect it will run for at least as long as the last Leftist zeitgeist.

Actually it would be very easy to explain to leftists what they need to do to get back in the game, but it looks like it will be a long while before adherence to the old model can be replaced by a newer and savvier one.

I think I get the gist of "the Frankfurt school" idea. The problem with discussing the media as cultural hegemony is that thanks to freedom of speech, while we do have a popular media with identifiable Hollywood or musical or television elites, there is a counter-media in full flower in the RW--your Breitbart, Fox News, Drudge Report, AM radio talk shows and them. Marxism looks at a synthesis of ideas as creating progress. But where there is open distrust of media that doesn't reinforce one's own biases, where the conflict can't be resolved, a state of culture war exists.

No one who was alive to hear Pat Buchanan at the 1992 RNC speech is unaware that a culture war was declared, and, unlike the Log Cabin Republicans and them, I knew what side I was always going to be on. I think leftists failed in explaining how this was also a culture war against health care for broke white mommas and their asthmatic babies and coal miners and their black lung and veterans who would be made to pay out of pocket to private institutions and possibly get reimbursed...If Hillary Clinton showed up in a Western Pa or OH town with lead-polluted water instead of just Flint, maybe we'd be talking a different outcome. If she talked to more veterans groups--?

But don't forget that "Morning Joe" and FOX News, despite their supposed journalistic elitism, gave Trump the place they did, enamored of his celebrity and fully unwilling to call out his bs. Megyn Kelly could have stayed calling out his sexism, but she didn't. Trump lost the popular vote by 2.8 million--I don't call that a "zeitgeist thing." I just think the left needs to grow the heck up, recognize what's at stake, and act accordingly. Serve the people who were not represented in this election. Make every policy issue matter like it was for heart and soul of this country. We have talked a rational game--but we need to take our stories to heart. We need to get back to talk about unions, jobs, and economic justice, but if we don't still speak out on social justice, we are throwing our base under the bus.

There is not room for compromise, there is only ever recognizing that Dems need all of us to benefit any of us.

It's hard to imagine what policy changes the Dems need to make to 'better serve the people who were not represented...'. Republicans have a specific economic agenda consisting of upward redistribution of wealth, while Democrats have a specific economic agenda that redistributes the wealth downward. This is not 'socialism' in any functional sense - this is a slightly more populist economic policy in a free market capitalist economy.

Republicans want to benefit the wealthy, Democrats want to improve the lives of the poor. However, if the poor can be mis-directed into voting against their economic interests by appealing to their tribalism, racism, sectarianism and nationalism, the Republican party is well positioned to exploit that weakness while it offers no path forward to the Democrats.

At the end of the day the Democrats don't have any fundamental changes open to them that wouldn't significantly shrink their coalitions, and they don't really need to. They won the popular vote again this time (that's 6 outta the last 7), and without the Comey letter they would have held the White House for a third consecutive term. They just need to hold the line, and try to find a better candidate than either of the two they trotted out this cycle...

Hi Vixen, I get where you're coming from; I just think you're fighting the last war. This war is about globalism v. nationalism. Elitism v. populism. Theresa May is getting ready to trigger Article 50. Le Pen is coming on strong, and we have elected Trump. I don't think Italy wants any more banks to fail.

The only thing that you can really fight to accomplish is to try and win back Pennsylvania. If you and your colleagues can do that, you will have accomplished something big.

All those people you mentioned if reference to Pat Buchanan voted for Trump this time around, for obvious reasons.