2016: George Michael and The Suckularity 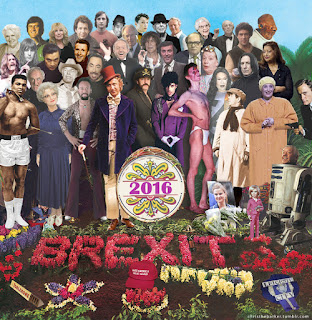 If there was ever a year that culturally just bukkake'd every eye until there wasn't a dry eye in the house, it was 2016. The death of David Bowie I sort of could handle--he was older, you understand. Alan Rickman, too. Glen Frey, life happens. The death of Prince--after the death of Vanity (Denise Katrina Matthews)--was closer to my musical time. But it adds up:

The announcement that George Michael died on Christmas was exceptionally cruel--typical for this year. Known for a song actually called "Last Christmas" among so many other great tunes, George Michael was a gifted vocalist, song writer, and extremely generous and giving performer.

I loved George Michael as an early gay icon--I never really understood how anyone had ambiguity about it, before he came out at the end of the 90's--to me it was just a thing I knew. But what was unambiguous was that he had an amazing talent. His lyrics and his ability to deliver them were just impeccable. His song, written while so young, "Careless Whisper", stands up against anything in the American songbook.

This one hurt me a little. But I understood this weird thing for a while--

It makes me a bit morbid to think that this experience of people I remember, not completely antique old B/W movie and tv stars, but people I actually watched, dying, will likely accelerate as I get older.

The increase of venues for popularity outside of politics and cinema and all, the "fifteen minutes of fame" Andy Warhol noted, meant ever so many more people would become famous or semi famous enough to be recalled. And as we all get older, so do our contemporaries. So it happened that in 2016, so many people we knew or at least, knew of, came to pass, and it sucked or at least, sucked so much worse than prior years. But if my calculations are right (I didn't actually do any real math here) this trend will continue. The older you get, the better you will know those people who die, and the closer their ages will be to your own.

So expect no comfort from 2017. But I listen to George Michael and know while he lived he made some progress happen. We aren't promised forever--let's just know from so many examples how to make our time count.

*Picture stolen from here.
Posted by Vixen Strangely at 12:32 AM

At the beginning of the year, I was sort of able to deal with the celebrity deaths by saying, "Well, the Sixties and seventies are definitely over now."

By the end of the year, though, with people like Prince and George Michael passing, it started to look as though the Eighties were way over, too, and that is disturbing.

We all move up one line closer to the edge of the cliff.