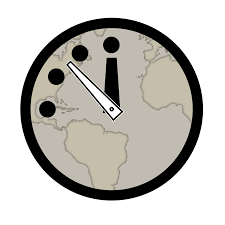 It's Christmas already in Philadelphia, PA, from which I write my humble blog. I'm a Generation X-er. The year I was born, 1972, the season was marked by the Christmas bombing of Hanoi.  I grew up with a consciousness that the world could actually end because countries got very mad at one another. We even called it "MAD"--Mutually Assured Destruction. There was an understanding that if nation states got too far out of line, we would have a global catastrophe resulting in millions if not billions of casualties.

The millennials don't really have this experience. The people who grew up with 9/11 as their significant milestone of consciousness, or indeed, had that event occur before they were even really aware, might be more inclined to see war and violence as being a product of state and non-state actors performing acts of mass destruction at more or less close range. The threat of global thermonuclear war just wasn't as ever-present in their minds.

The idea of an "arms race" might seem like a curious 1980s artifact--as it should. We (the US) had an arms race with the USSR then. There's a curious idea that the USSR fell because the US simply outspent them into oblivion which might be conditionally true, even if the scenario is kind of ridiculous when you think about it. The SDI or Star Wars program, which was never a working thing, was scary to people who had already discovered they didn't always have the wherewithal to sustain working nuclear plants.  The weird thing is , the missile gap was always kind of like Iraq WMDs in the early Bush II years--we really had overmatched them considerably. We might have been caught off guard by a thing or two in the space race, but we really had produced a quantum fuckton more of fission-y boom-y things. But probably more importantly, the West also had blue jeans and Beatles records and a worldview that didn't suck. The wall came down alright--but it was because walls suck and people who put them up suck the worst.

But then along comes Donald Trump, who Tweets his crypto-nuclear-warrior stance and then repeats it for pajama'd pundits.  His flunkies can try to take that back, but they can't. Not for people who grew up understanding that nuclear war was the actual end-times scenario (screw that Four Horsemen/rough beast BS) we really needed to be looking out for. But he has a kind of plan, and may have had for decades.  And if he still has the same plan, he doesn't understand what actually motivates all the players, or why the nuke debate is whataboutery--no rational person should want to resort to them, so let's not debate nukes and talk about needs and values instead.

I don't like the direction this talk has gone. His theoretical "sanctions so strong, so unbelievable" was always idleness. His likelihood of ending Russian sanctions (and not entirely for strategic reasons) is a different kind of idleness. He will tolerate Russian nukes. And how about the rest of the world? Random, un-thought-out vamping on a subject he doesn't have enough knowledge to definitively discuss.

I've lived in the narrow slit of the Doomsday clock before. The coastal "elites" (I'm working class) are the direct line of fire. I expect to be vaporized right away. Those who will enjoy the food buckets of televangelist plenty in "flyover country" will probably have a handful of indigestion-marked years to exult over our passing as their skin falls off. Trust me, the instant vaporization is the better deal.

Or maybe none of  this will happen. Still, letting people feel like doomsday is at hand is a great psy-ops tool. Let's hear it for Trump everybody! Golfclaps all around.

Posted by Vixen Strangely at 2:08 AM

One correction - all nuclear war planning (for all sides) includes heavy, redundant attacks on nuclear weapons - air bases, naval bases, and most of all ICBM silos. The US built most of its land based missile infrastructure in Montana, Nebraska, the Dakotas, Kansas etc. Because these are very small, hardened point targets and considered the most critical targets in the first strike, they are each assigned dozens, or even hundreds of warheads, typically of much higher yield than would be used on cities. They are also ground detonations rather than airburst. The result of all these factors means the midwest - flyover country, if you will - will be an uninhabitable toxic wasteland much more than most of the coast, which will soak up more scattered, distributed, lower-yield hits...

Hmm...this is kind of not the impression I think even people in the heartland believe, which makes the survivalist mindset in the hinterlands seem even more poignantly wrongheaded.