See You Next Tuesday 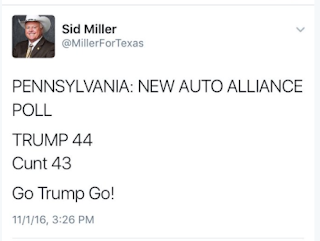 It's a funny old thing, social media. It's very immediate. People Tweet or post Facebook comments often in a kneejerk way. It's the way to talk with people you know. Maybe you talk a certain way with your buddies in private. But if you are using your government name out in public and hold public office, maybe you shouldn't actually call the Democratic nominee for president a "cunt".

Public note to the TX Agricultural Commissioner: Mr. Miller, I have one and you came from one. But calling Secretary Clinton that was obviously not intended as using a pleasant Anglo-Saxon vernacular term for the vulva. What you were implying, right there, was that having one is being one, and she was a part, but not a whole, human being. And we--women--are real people. Please do not ever forget that. You may just be a good old boy, never meaning no harm, but the darndest thing you ever saw is getting in trouble with the Moms since the day you were born. (Sorry for the Dukes of Hazzard theme earworm, but this is me. I'm the worst.)

This grotesque kind of misogynistic name-calling and seeing a female candidate as less-than isn't unique to Sid Miller, though. Why, we have a sitting US Senator, Richard Burr of North Carolina, who said a couple damn dumb things just lately. He said that a rifle magazine missed an opportunity by not having a bullseye over a picture of Hillary Clinton, but haha, no he just worries that as president she would do weird stuff like try to appoint Supreme Court Justices, which he would totally reject all the time.  No, it's not like being a female running for president and even possibly being sworn in, would make her an actual person who should not be potentially killed or should even have her judgment as an elected official somewhat respected--right there. Smoking hot misogyny.

So, it isn't really just all about Hillary Clinton, though, is it? I mean, messages about Hillary Clinton's body and whether she's strong enough and whether she can be tough as a negotiator for American interests--take this story of a woman just wearing a tee shirt supporting Clinton. She got told: "Hillary Clinton is a fucking cunt and so are you." For the unruffled reader: imagine you are hearing this as a woman with no certain expectation of what the next move of a person is who says such a thing, but the absolute understanding from previous experience, of what it could be. A threat against yourself for having any opinion or agency at all. Imagine being told that the only reason you support your candidate is because you share common genitalia. Imagine being reduced to your parts. Not a whole person. Just bits that can be hated and dismissed.

So what I'm saying is, there is a whole lot of misogyny out here, and it says a lot about how some Trump-backers see women. We're to blame for anything we are adjacent to, even things done to us.  Whether you lose money in a land deal or lose a friend to suicide or an embassy is attacked--a woman takes the blame for being there--like a woman being blamed for a storm rising against a ship--witchcraft! Women are to blame for hands up our skirts and comments about our weight and whether we get reamed out for not showing respect due a man we are reporting on for our particular news outlet. The anti-Hillary Clinton narrative has always seemed based in misogyny to me--who is she to act like a public official or a competent person without the absolute guidance of outside (mostly male) judgment forever? But that isn't just about her--it's all of us.

I want Hillary Clinton to win, and by a lot. She needs to not just shatter that ceiling, but atomize it. We need to work to erase the idea of "because we voted our gender" because I voted for (actually--will vote, PA having no early voting) her intellect and empathy and I believe she simply is the better candidate, and that doesn't make her a c-word. That makes her president if we all get out there and prove that the knuckledraggers who call women these names and think so low of them, are a dying breed.

Posted by Vixen Strangely at 12:38 AM

Did you see that he apologized but said he just retweeted someone else's words because of the numbers?

The guy spends half his day on twitter and doesn't know what a retweet is?

That's not a retweet. Obviously.

Hi Vixen, I agree. As you have no doubt ascertained, I have been keeping my head down and avoiding conversations about politics. I voted October 24, and so I have discharged my civic responsibility. Naturally, in lodge activities, one spends most of the time in illo tempore. This is Eliade's word for sacred time as opposed to profane time. One is always in sacred time whenever they are serious practitioners of ritual or meditation or some other practice that necessitates a step away from the mundane and a refocus of attention and all one's resources onto factors outside of the circle of time.

In any event, I have no special insight into who will win the election. However, I thought I would pass along some coping mechanisms that have been valuable in freeing me from obsessive concern about political outcomes. (The purpose is to see through the system, not join one side of the system.)

First, it was a great relief when I realized that American politics is not a climb to the mountain top. It is a seesaw, and when you press too hard on one side it energizes the other side. If you stretch a rubber band too far, it snaps back. So there is not permanent achievement or permanent realization of one's goals. It's an endless scale where the balance is always being upturned by one side or another. So if your side loses, don't worry, it will be coming back up again in the future.

Second, I was greatly relieved when I finally realized that you can be a strong conservative or liberal and not be a crusader rabbit. One can fully inhabit one's political credentials and not feel like it is necessary to insist that others share one's views. A citizen can be a conservative or liberal and discharged their obligation by voting. I felt a lot better when I removed myself from the vexation of thinking that I had to “do something” about it.

I am tempted to explain a perspective of this based on the Qaballah, but I will forego such an explanation this close to the election.

As you have shown interest in Buddhism in the past, I might point out the interesting event of the venerable Khenpo A. Cho, a Gelugpa monk of Kham: his apparent dissolution into the Rainbow Body. That is, after a lifetime of many practices which I will not try to list, in the late 1990s his physical body dissolved into light over a period of several months in front of a number of witnesses. Some religious investigators from the West are on site to learn more because of the light it may throw on Christ's resurrection.

Take care, and do not be too upset should it come to pass that your candidate does not win the election. There will be another.

Thanks for that, Formerly Amherst. There are some people who've put their emotional investment in partisanship ahead of their senses and ideals--that worries me. I don't like when politicians--on either side--get into apocalyptic-sounding rhetoric, because I think it places undue stress on our civil fabric. There has to be space for people to talk to one another and find their common goals, even if they have some opposing views, and I worry that, as we have spoken of here before, people become too siloed in getting news and opinions from one side or the other. This hardens people so that where there is friction it's like tectonic plates moving--upheaval and earthquakes! Instead of a friendly tug of war between citizens. As for me, I feel like the news might get pretty weird between now and election day (and maybe for a while thereafter)--so practicing some detachment might not be a bad idea.

A public official tweeting at 3:30 in the afternoon on a weekday?

I'm a Texans and a taxpayer, so I guess I'm paying for what i'm sure he will simply dismiss as "locker room talk"...

Calling these guys a basket of deplorables is far too kind!