So Much Trump Stuff 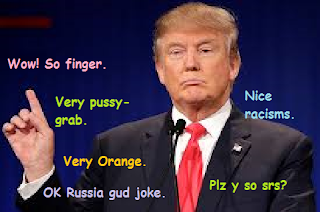 Donald Trump has a hard time with his campaign holding to a narrative about him because the image he wants to project, of being a successful businessman, a doting father, and a charitable human being, are all kind of betrayed by the facts about himself that suggest he is a shitty businessman, an indifferent father who womanizes, and a person whose public expressions of charity are wholly self-serving.

But one of the things he largely suffers from, anent his campaign's absolute failure to self-vet, is how easy he has set things up for his opposition to make a narrative about him that he can't quite control or counter. Let's say we were talking about whether Trump made use of OPM (or is that OPL--other people's losses) to save himself from a hefty tax bill with a totally dubious maneuver. Countering it by simply saying he did not is cute, but since he has totally made a matter of principle out of not showing his tax returns, that sorts of plays into whether one believes his returns are a minefield of shadiness.

I guess the biggest question mark he has left wide-open is the Russia thing. Franklin Foer's story in Slate almost kinda sort of feels "too good to be true", right? Like how in the world can we continue to ignore all the times he denied the intelligence agencies' word that there is so a connection with Russian hackers, and the DNC/Podesta theft/leak, before it looks like he's childishly covering up an op.

I don't know to what extent Trump actually is being played by foreign agents. Has he been groomed for a while? I'm in no place to say. Does it look stupid-bad to me and like he is in deep with Russian banks because he's a debt-ridden bad idea factory? Does it look like he'll somehow be less apparently shady than the former First Lady? (No he won't.) Take even things like his shady relationship with WikiLeaks (via sentient pond scum Roger Stone), which might be a Russian disinfo shop.

It would take months to sort all this sort of drama out, but I will entirely and wholeheartedly commend FBI director Comey, despite this search into Trump being a thing for several months, not actually bringing this thing up satisfactorily--just to keep everyone informed. So close to an election and all. Because that of course, would be wrong.
Posted by Vixen Strangely at 6:26 AM

This is really depressing.

You got that right.