This Makes Me More "With Her", You Know. 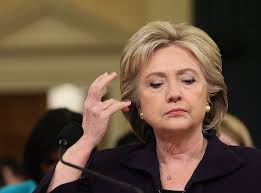 The funny old thing about Comey's tripping over Weiner's dick to potentially cover Trump's ass is that I am so already over the email scandal and all of that that I could not care less what shakes out. Fuck it. Trump wants to be a whiny little bitch about what he calls "rigging", but the fix against Clinton having a smooth glide-path to a White House landing was for real and no one expected anyone would make it easy for her. The fix against Hillary Clinton started at birth when her birth certificate was marked female and you know what?

She isn't a liar (not for her line of work and especially not compared to Trump she isn't)  and she isn't corrupt. She's human, and not- perfect, and she sometimes doesn't do things 100% right--but at the end of the day, she gives a shit. She always has. She has always seemed to know that her business on this planet is give-a-shitting.  She cares about war and she cares about women's right to decide our health outcomes and the rights of gay and trans people and tries to talk social justice into the public discourse whenever she can. So she had a little fuck-up with her emails--sorry? I didn't know that ephemeral details were supposed to impress me into not liking a candidate who shares my values. And has done so as her life-long practice.

I despise and show all due contempt at the effort to smear this woman, the capable  and trustworthy woman I have long-endorsed, because I know the detractions against her are expressed in air or water, not stone.

I remain with her, and think many right-minded people will.
Posted by Vixen Strangely at 1:58 AM

I was all ready to donate to Hillary, as I did easily to Sanders. But then I discovered that you can't use PayPal. Hillary's campaign only accepts online use of CC info.

Really? No Act Blue account? No Google account? No easy-peasy PayPal setup? No option to send in a money order or bank check or cashier's check, or even cash?

Shit. That's your problem right there. I can't give you money because you want me to enter my CC info to a person the FBI and god-knows-who is gunning for.

I've said it before: Don't fuck this up, Hilz. Please. You have one job. I'll even give you what little money I have. And you fucked that up, too.