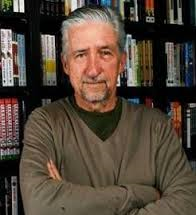 It strikes me as weird that part of my mind always located him in the 1960's. even though I wasn't born then and he went on to do other stuff. Anyway, Tom Hayden was a social justice warrior before that was even a thing, and helped construct what later left activism became. The good, useful kind. Not the dudebro bullshit.  The Port Huron statement still rings a tone to this day. He would have been with her.  I admire his questing and questioning activism. He believed in the ability of peaceful protest to make a difference, and he did make a difference. He lives on wherever people get sold on following their conscience and doing their part. I don't know but that he might have been amused at headlines reading "Jane Fonda's Former Husband Died" as he also understood feminism.

He worked for people. That's the best takeaway. He cared about them. He got what mattered to people. He thought incredibly deeply about it.  And he wanted to do right by them.

What else can anyone do? Let this be his sigil: "If we appear to seek the unattainable, it has been said, then let it be known that we do so to avoid the unimaginable." Which I think suffers to express the concept of "getting it" as the whole thing can be "got". Humans strive not from our feeling of security, but because of our deep knowledge that shit can get worse. But out of that negativity arises visionaries. He was one.

Posted by Vixen Strangely at 2:30 AM