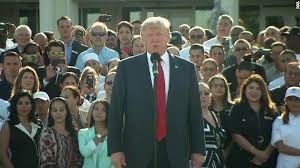 GOP presidential candidate Donald Trump hit on a pretty good, or at least, reliable, Republican talking point by hitting on the news regarding expected premium rises on the ACA exchanges, but because Trump is Trump, he sort of had a message for the GOP faithful, but he eated it:

"I can say that all of my employees are having a tremendous problem with Obamacare," he said with scores of workers at the resort clustered behind him. "What they are going through with their health care is horrible because of Obamacare, so we'll repeal and replace it."

Right. So he introduces people who he gives a paycheck to and has them freely and enthusiastically praise Great Leader Trump, and then sort of doesn't know whether in His Munificence he gives them healthcare or not, or whether they are at the mercy of a cruel and absurd iteration of Big Stupid Government. Way to go, you! So Trump has either revealed he does not exactly know what an Obamacare is or how it works, whilst simultaneously signaling he hasn't the shakiest consideration of what's up with his employees' pay-packet. (Does he know what his businesses do?) Maybe both. Or maybe he's just lying his face off about the whole shebang--let's face it, the joy of Trump is that he'll "keep you in suspense".

I dunno. Maybe it's just my relentless notion that politics should be about ideas, but isn't it kind of fuckery to make a speech about Obamacare in response to sort of bad news about how ACA premiums in fact are going up (albeit not in an unpredictable way, nor a way that wouldn't be a "tweak" as far as regulating the insurance companies goes--if you even think they need to have their asses regulated at all goes--and I say we sure do)--

But Trump didn't go after the policy argument. He just lets us understand he will take down the whole thing (which has increased the percentage of covered people in this country saving who all knows how many lives?) and replace it with something amazing to be determined later in probably a haphazard and dumb way like this hotel/destination advert pretending to be a political rally. Because his campaign is a dumpster fire, and his administration would not be better run, because why would he even bother?

I am so tired of this damn guy and his stuff.
Posted by Vixen Strangely at 11:53 PM