James O'Keefe is Kind of a Weird Gun to Hire. 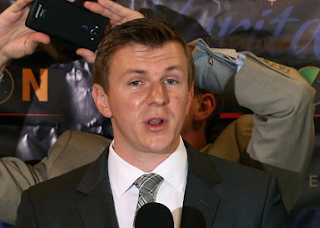 Ok, so I will probably always think of little Jimmy O'Keefe from down the street as the weird asshole in the 1970's Blaxploitation version of a pimp costume who "took down ACORN" with what was basically a lie about whether they were registering people illegally. ACORN did no wrong.  O'Keefe was just a flea on the ass of a bigger picture on the right to pretend that maybe they were losing not because they couldn't craft messages to a broader audience than white and uptight, but because there was some rigging.

So, in other words, he started out trash. And the saddest thing of all for such a young man who maybe showed promise is, he stayed trash. So think about this--his outfit got paid by the Trump Foundation a minute before Trump threw his hat in. In pecunia veritas, maybe? I don't even know.  But his product as info regarding voter fraud or stirring stuff up at rallies? Meh.  It hasn't got specifics, just speculation doctored to look definitive.  Sure, some folks will want to believe his version, but I'm thinking if you don't already buy what this dude stands for, you should probably ponder all the valid reasons why he needs to be handled with the containment suit.

This boy lies for money. That's what he made his job. And anything out of his shop needs transparency.  Because this partisan performance artist thinks lies are just as good as reality. And they are not and never were.

As for the charge Democrats were ever starting shit at Trump rallies--you know what that sounds like to me? Locker room talk. You know how men do. If Team Offensive Orange can try denial, I don't see why I have different rules. Locker room talk. Sometimes people just brag and show off and whatnot. Sometimes they pretend more electoral involvement than is actually possible might be obtained because #tryinghard.  But that doesn't mean "proof positive"--does it?

See how it works? But based on the polling this isn't going to be close enough to steal, so find another reason to be, Trumplodytes.
Posted by Vixen Strangely at 1:12 AM