The Mass Murderer of the Cascade Mall 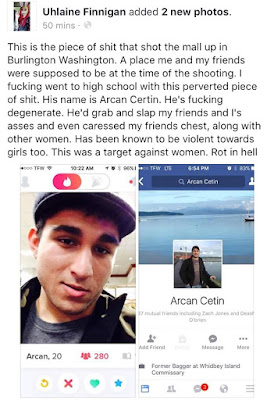 It's probably a bad sign in this country that the deaths of five Americans doesn't really make quite the scene that the pending divorce of Brangelina does. Frankly, Brad Pitt and Angelina Jolie seem like cool people who had a really good thing for a while, but if it didn't work, I just wish both of them well and think that details are their own business, not mine, right? But the continuations of a trend regarding mass shootings in this country becoming so ho-hum that the only way some folks can even get it up to notice this is freaking disturbing is if it might just be terrorism, for some degree of bias-confirmation? Well, that's kind of news, isn't it? After all, Donald Trump seems to think it is--


Somebody should probably let Trump know that Turkey is majority Muslim, but not actually in the Middle East--it's Europe. (People died from drug overdoses everywhere. One man's riot is another man's freedom of speech. He's not the most woke MF I ever came across, basically. He just about manages conscious.)

But there's this thing Cetin might have done before opening fire on a Macy's make-up counter killing five victims, four of which were female--he might have called out a woman's name. This entirely fits in with something I've been noticing about mass killers.  Misogyny is a prelude. It might even be context for all I can tell. The guy was militaristic and macho--the one Tweet where he mentioned Hillary Clinton kind of reads like a bet where if someone loses, they do something like shave their head--in other words, if his team could possibly win, he would consider voting for Hillary Clinton which is so not his thing, since he considers Obama a Commie. He must have given his team bad prospects.

His FaceBook and Twitter presence is ridiculously skimpy for a person of his generation. I get the sense of someone who wasn't making social connections and who dropped out occasionally. Christopher Koulouris of Scallywag and Vagabond  did a pretty deep-dive on this subject. It's a solid and detailed profile of a guy who was kind of a fuck-up--but definitely hated women.

All the details aren't in yet, and the dumb piece of work was taken in alive, so he still might pledge allegiance to Daesh because shooting other humans because you are basically unfuckable is a pretty lame thing to do. But I am kind of leaning toward misogynist dipshit with this one. Also--not sure how five people getting shot to death isn't more of a bigger news-thing.
Posted by Vixen Strangely at 11:28 PM

Yeah, misogynist haters are the norm in the snacilbupeR party, so this guy must have been both.

Hi Vixen, I have some info about Angelina Jolie. But first I have to resist waxing metaphysical when it comes to questions regarding how it can be that mass murderers receive less attention than the goings-on of movie stars.

It is all predictable from the point of view of the counter initiation leading to the kali yuga. I won't go into it because I appreciate that politics is on the front burner. However, I will simply point out that if you look at commercials on TV you will see that fulfillment is always couched in a perspective about material objects. You know, if you buy this, things will be great. If you buy that, things will be great. Even the fact that fulfillment would be presented as the purchase of objects is already deeply into counter initiation territory. The truth is that purchasing objects can be fun, but there is nothing transformative about purchasing objects or trying to find fulfillment in them. I'll leave this aside until after the election.

Surprisingly enough there is a political component to Angelina Jolie. Apparently she wanted a couple of things. One, an open marriage. And two (brace yourself), she wants to become a member of the House of Lords. You know, she has been establishing herself as an international do-gooder by chairing different organizations with connections to the UN, etc.

She is moving to the UK. One of her good friends is a former foreign secretary, and another is a titled woman. Angelina has horsepower behind her, and she has a goal.

She wants to become a peer, and then become a member of the House of Lords. Her ultimate desire is to become the new Princess Di. (Believe me, this is all much crazier to me than considering the kali yuga.) You realize that she is already Hollywood royalty, and her father Jon Voight is a well known conservative political activist. She want s to parlay all her accolades into the ultimate payoff.

You know, parenthetically, all she would need to do to simplify her trajectory would be to marry an earl, which she could easily. She'd then be Lady Someone. Princess Mary of Sweden used just used to be a high level worker bee, and she became a princess when she married the king. These things can be done, my friend...

Well, if she's successful at least we can be pleased that we've all had opportunities to see her naked.

I wonder if fascination with titles comes with a sense that it makes one (and as a consequence, one's causes) seem more legitimate. It strikes me that she is actually a serious person: http://www.mirror.co.uk/news/uk-news/angelina-jolie-tells-house-lords-6405991 , but a lot of attitude that actors and musicians right and left get regarding their activism is "Shut up and sing". Which I think is sometimes unfair, because as you say--acquiring stuff isn't everything. Feeling that she's doing something capital I-Important, probably gives her more than red carpet walks can.