I am going to leave the story as originally posted, both in the interest of not being a punk myself and owning up--Lesson for myself: don't post mad and don't get pissed-ass moralistic because you might have to eat what you wrote someday. Although I maintain my position that honest-to-goodness rotten people do show up at these rallies, I understand that protesters also use tactics that are antagonistic and also, I should keep in mind that stories have two sides (even if only one side was widely reported at the time of my posting. ) 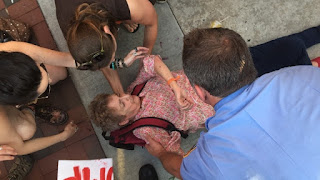 Shirley Teter is 69 years young and is appalled by what Trump stands for. Among other things, she doesn't like that he is the bottom when in bed with Putin; and when she brought this perfectly obvious fact out to one of the Trumpensturmers, they tried to knock the taste out of her mouth.

Although she fell on her oxygen tank, she will probably be okay. But the coward who did this to an old lady with an oxygen tank is a coward and a punk. And he's lucky that a Trump rally is so full of punks no one thought to rough him up for swinging at an old lady, because that is shit-hearted and otherwise gutless. There was a day when if you took a swing at an old lady, some sensible citizen would have dropped you.

Trumpenvolken have either stopped seeing sense, or this happened where no sense-having people were around. All the same, is this not deplorable? What do you need to see if this isn't deplorable enough?

In response to the two comments below, I wanted to see what I could find out about the incident. For the most part, I discovered that a lot of right-leaning sites covered the additional info from Breitbart, and I hadn't seen a lot of left-leaning sites do that--so my thinking being what it is, I wanted to see if there was straight news (neither-way leaning, journalistic, not-partisan) that gave me more of a picture of what transpired. The problem I began to have is that we do underestimate the deviousness of a feisty granny with a good story--at the same time, I'm not ageist and able-ist enough to discount that a 71-year old man with cataracts can't deck an old broad in the jibs. So of course I wanted to see the video. And I just want to point out, if we've got what looks like wrong-way cell phone video posted at Breitbart for our source, my liberal instinct is "Yeah. Right. Pull the other one." The edited ACORN videos. The edited Shirley Sherrod video. They've presented video before in a way that frames an issue a certain way, without it actually being what happened.

And it really shows her walking behind him, then I can't quite tell if she touches him--and then the camera unhelpfully is jostled all about and you can't make out what the hell went on. It doesn't seem to make what happened entirely concrete for me either. So now I have the sympathetic version of her side of the story, the version presented by Mr. Campbell's lawyer (who is obviously going to give his client's side in the most sympathetic light, obviously), and a video that doesn't make heads or tails. There is some eyewitness information, and the part of the story where people went after him (although he was not arrested then and there because police themselves did not witness the incident) might suggest they what people saw was him hitting her. And yet?

And yet I know that activists sometimes try to provoke people. I've seen pro-lifers do it. I've seen environmentalists do it. I just don't know whether or why Ms. Teter picked this guy to try and antagonize. So if she did grab him for some reason, it's possible he did try to brush her off in a way that made her frail body hit the dirt in a way that wasn't intended to "knock the taste out of her mouth" so much as get her radical ass the hell off him. It's a basic "he said/she said" except it happened in a crowd of people, and the original reporting is she got decked. I wasn't there. I couldn't find where she recants her story though--although if Formerly Amherst could provide me a link, I will certainly look into it.

What this searching through the story has actually done, and I might be a little glad of it, is completely desensitize me. I really at this point don't freaking care whether this lady got hit, and I have no intention of arguing the point. Dipshits with 88 tattoos and Confederate flags love Trump, and so do quietly Tea-Party leaning elders who thought it might be keen to see a presidential candidate up close. I have no interest in arguing any of the points. I've had it. People who point to Ms. Teter's lack of facial bruising are in the boat with people who noticed the suspicious lack of bruising on Darren Wilson--feh! I'm simply out. I'm sure there is a thing called objective reality, but I'm increasingly persuaded that the facts on the ground are changed based on the relative position of the observer. The problem here isn't the mythic "fair and balanced" fake objective cargo cult of the "Both Sides" Narrative. It's the way things get ultra-polarized by the basically as unhelpful "Let's treat one side of the story as the story" without actually doing the thing where people try to interview a bunch of the people who were there, get an idea what actually happened, and then report on what people saw actually happening without filling in the cracks with suppositions. What happened is the story. That's the journalism. Otherwise we just get Left stories and Right stories and we aren't even living in the same damn country anymore.

Commenters and readers--I get where this one went haywire, and I have no interest in duplicating the problem. But it is an election year and I am a dedicated partisan, not a journo. Most of what I do is strongly opinionated, and mostly because I get my anger on. But I want to be honest around here, too.

It matters.
Posted by Vixen Strangely at 11:49 PM

The punk was a half blind 73 year old who was grabbed from behind by Teter. LMAO
https://www.youtube.com/watch?v=u3SR3_2g6PE
New headline
Blind 73 year old Trump supporter assaulted by 69 year old woman

Vixen, I also read an article about this event.

Apparently this partially blind 73 year old man was being assisted at a Trump rally when he passed a screaming 69 year old woman who then tripped over her own oxygen apparatus and went down. So the woman, having been felled by some of the medical equipment needed for breathing then concocted a story that the older man plagued by limited sight punched her in the face.

Watch out! We senior citizens can be feisty.

I have a message should I have any friends out there. Please develop interests beyond politics as you age older.

You will discover that dignity is much more important than hysteria.

And I might add that it would be very nice if the media stopped trying to whip up hatred In order to energize a voting bloc.

(The two combatants should either reconcile or get married.)