Donald Trump is Always Gonna Be A Birther 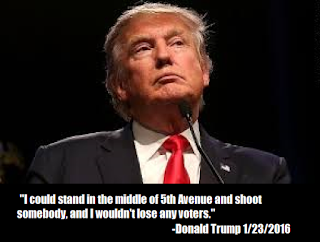 Donald Trump is an uniquely disingenuous man. He is a liar. It's what's for breakfast, lunch, and dinner with Trump--he is going to lie about something. He decided to lie and say he thought maybe Barack Obama was not eligible to be president because of his birth certificate. I would like everyone, everyone please! Stop pretending Donald Trump started birtherism. It was just a thing that was around message boards and blogs in 2008 and to their ever-lasting shame, some PUMA-types need to own up that they kind of liked the idea that this was a fun way to kneecap a credible African-American candidate. But no. There were so many fathers and mothers of this failure--Orly Taitz. Jerome Corsi. Near as I can tell, this was never a spectacular issue for Trump until about 2011 or so.
It doesn't appear to be at all true that he stopped after the birth certificate was put out by President Obama.  No, he kept ye olde home fires burning, even being unwilling to state for certain that the President was born in this country as late as Thursday.  I can't be certain about this and it's late, but there's this issue that Trump wanted help on regarding China (which he says he is going to make the best deals with, if you believe him) . The Obama Administration said there wasn't anything they could particularly do for him. And then that was the year Trump got salty. February 7, he writes that letter regarding China.
February 10, he's talking up birtherism.

Now, I see Trump as a vengeful and petty person. He's a get-back guy. He didn't have any information he was really questioning about Obama's birth certificate on behalf of a nation riven by this alien character; he just got thwarted by the Obama Administration about something and decided to be a major asshole about it. So he made it personal. And then when Obama released his long-form birth certificate and had the temerity to laugh about it at the White House Correspondents Dinner, he got so mad. And then for an encore, Obama fucking got Bin Laden.

Trump is a sad egobaby so he didn't even try 2012. But he kept kicking that birther thing until he thought, maybe, 2016 is a good year to run against tired, sad Hillary and prove his ass didn't get beat. So he messaged to the alt-right, and then decides at the nth minute he wants to disavow?

Nope.  It was always a lie. His investigators he pretended to send to Hawaii to find really interesting things? It was a hoax. See--the problem isn't that birtherism was just wrong--oh hell no. The stupidity of having to pretend that Obama's mom would have had to be in Kenya for Obama to be born there just makes cases like Terry Lakin appallingly disappointing--is it really possible to have this much disrespect for another human being that you throw away your actual future for it? But what did Trump have to lose? He discovered that you can have a reputation as a ginormous prick in this country and be celebrated. You could basically get away with murder, if you knew how to massage the press.

So he stood with some veterans, and he talked about his new DC luxury hotel, and then offered up a statement that he figures puts to bed the last five years of him questioning the President's birthplace. While having another prominent birther on the stage with him. As if messaging "Naw, I'm not serious."

And then suggested that Hillary Clinton should do without armed Secret Service protection so we could see what happens.  Not the first time he suggested how easy it could be to kill her, you know, if you had the right armaments. He can stop talking about Obama's birth certificate, but he can't stop whatever it is that makes him sociopathically unconcerned with how what he says translates into what happens to other people.  Because he doesn't care. Because he doesn't think about outcomes. Because he's a conspiracy-theory peddling grifter who wants attention. And nothing will ever make him a guy who didn't demand that the rightfully elected president of my country "show his papers".

That did not make America great. It marked a low point in our discourse and he's been holding it there, since. Nothing he can say changes what garbage he has put out there. Nothing at all. Will he make good on his promise to give millions to charity if he was satisfied that the birth certificate was legitimate? (Just like Sherriff Joe Arpaio used taxpayer money for his stupid birther investigation, I would be surprised if Trump didn't pillage the Trump Foundation a little for the window dressings of this hoax.)

This albatross of birtherism doesn't drop off like that. It stays, it rots, it covers him with flies and maggots. He has popularity because most of his fans don't think he's a sincere loony, but a successfully vindictive slanderer. (Once again--deploringly, I note this is what they want.) But there can't be any ignoring what he said, and this doesn't walk it back or erase it. The record shows he was an open, active, conspiracy theorist who doubted the legal documentation of the sitting president for five years for shits and giggles and a shot at running for president. And that should be seen as really offensive.

He snowed you poor damn dumb MF's and shared it on the Twitter machine (unless he deletes it): 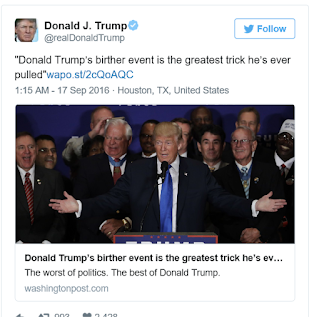 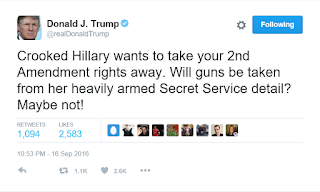 Posted by Vixen Strangely at 1:45 AM

Folks don't realize why his pronouncement was so short and at the end of his free media hotel infomercial: it is more tribal signaling to his deplorables that he really doesn't mean it, has no respect for the media or the non deplorables, and is just a "see? All done" to toss at the mainstream press. His alt right buddies see it as his being so clever to toss the press off the scent, while they revel in knowing trump did it with as wink and a nod to them. Nothing changed, other than his being able to tell the press he's done talking about that.

This is the best short piece on the whole birther crap I've ever seen. Thank you!