Phyllis Schlafly Has Left Us 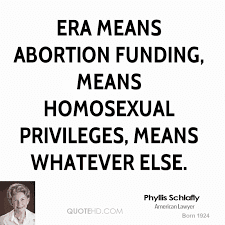 As a feminist and social justice warrior type since I could walk, basically, the existence of someone like Phyllis Schlafly has posed a conundrum, that I want to air out as a kind of eulogy. Admire her for making her way through a man's world? Or repudiate and drag her for whatever she's done or said to make things harder for other people than they needed to be? And the answer is "both".

She was a woman of great intelligence and talent, who raised six children and received a fine education, and displayed through her communications a deliberatively and exceedingly capable mind--also she was a narrow bigot of the very worst sort, and devoted her life to reinforcing the kind of hierarchy that kept white male Christian gatekeepers as the arbiters of the kind of society she thought we ought to have because people who didn't meet her "values" just weren't her people. Or maybe even people at all.

Betty Friedan once called her an "Aunt Tom"--my preferred term for her sort is "sister shafter". The kind of prim, reserved woman, who can't conceive of the sort of wretched abuse another married woman might face at the hands of a spouse, denying that marital rape is even a possibility, is a disgraceful denial of empathy. The lack of sympathy for the woman who needs must be a breadwinner because she has no man is as unchristian as the Christianity she used to justify such disturbingly dehumanizing attitudes towards her fellow female. Her attitude regarding queers was no less shocking, and not at all ameliorated by having an actual gay son.

And she was also a garden-varietal mid-20th century racist. She sided with Goldwater and you can read between the lines with that, and with Donald Trump because her attitudes regarding the browning of America were predictably "anti". She thought baseball had gotten very disturbingly colored--by foreigners. She was an agitator and proud of it, no matter what she thought other, lesser females ought to do with themselves.

I never liked what she stood for, or particularly understood how she stood for any of it. Rather than disliking her as any sort of formidable conservative mind, I tended to view her as a sort of relic--a mind trapped in amber, forever extolling a world that probably did not exist and wouldn't ever again, and "Hooray!" for that.

It's probably fit that she passed before a liberal woman became our US President. It would have discomfited her to no end.
Posted by Vixen Strangely at 11:01 PM