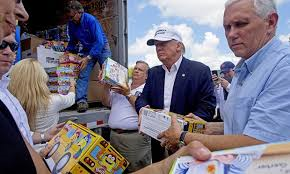 The kids of Baton Rouge might have a lot of free time, what with their schools and homes being destroyed, but they don't have too much time or need for portable space to have Play-Doh. Because why not? There is a lot of why not" to go around, as per usual.   It's possible that Team Trump, arriving opportunistically to just be seen in the vicinity of things, thought this would be great optics, even though he was advised not to make this into a photo op. But I dunno, you guys. There was more than just Play-Doh on the truck. It wasn't a completely useless trip. The really questionable thing was diverting local police for security purposes.

But at this point in their polling, I get that gestures matter for them. Like a push to be more "sensitive" to the African-Americans (although it was done in an awkward and off-putting way), or to suggest that that maybe his immigration policy won't be as harsh as he has said.

It's just that his gestures are not his problem. He is. His previous year of campaigning is. Changing news cycles imply that people will forget--but that isn't necessarily true. And he has left a trail of not-forgettable things.

Posted by Vixen Strangely at 9:06 AM