This Is Not a Normal Campaign 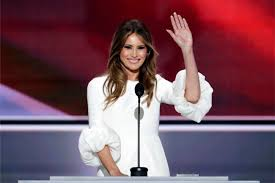 So, before I get into any of the things the RNC produced this evening, let's just get out of the way the fact that the entire day's news cycle was centered on the Trump campaign giving increasingly weirder and less-persuasive reasons why the wife of the GOP candidate happened to have said several sentences that were apparently poached from Michelle Obama's 2008 DNC speech.

The whole damn day, letting it upstage any other thing that was going on. This isn't exactly in "no, but it's a common shape, like a sheriff's star" territory, but yes! this is exactly where we are!  No competent political adults would let something shitty dominate a news cycle like this. They wouldn't just toss blame back and forth hoping it would land on the carpet for someone else to sweep away. It wouldn't be that hard for a campaign to simply say "Yes, this speech had some obvious borrowings and the speechwriters have been dealt with" instead of actually throwing the candidate's wife under the bus by basically giving away that like the not really ready for political go-time person she was, she tried to emulate someone who seemed pretty competent at the First Lady role--Michelle Obama.

(My other, darker, speculation is that the step kids helped sexy stepmom out by way of a little prank to get her ass thrown under a bus. No competent campaign would let that speculation even look like a possibility for the whole damn day.)

We had Hillary Clinton blamed for the furore (her campaign stayed mum, according to the ancient dictum, that when your opponent is hitting himself in the nuts, one does not intervene). My Little Pony was actually invoked.  Absurdist Trumplestiltskin Katrina Pierson spun bullshit into strawmen by claiming that Michelle Obama did not invent the English language. (Is Pierson a paid spokesperson for the Trump campaign--like, on purpose? She is appalling. Absolutely appalling.)

The Trump campaign seemed to go out of its way to self-immerde. Are there any adults at all in charge there? Should you possibly consider putting Charles in Charge?

But of course not.  Delete your campaign.
Posted by Vixen Strangely at 11:48 PM