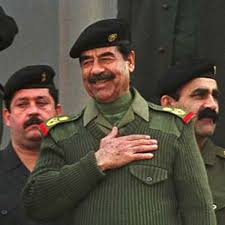 Well, of course Donald Trump had some good words for Saddam Hussein! It's not like this is anything new, for one thing, since he's said before that the Middle East would be better off if Hussein and Moammar Gaddafi were just left alone to do their dictator things. After all, he doesn't play favorites about dictators--he has nice things to say about Kim Jong-Un also!

Now it is true that he didn't always love Saddam Hussein and Moammar Gaddafi.  He's actually a little bit of a liar in pretending that he originally didn't support both actions against actual dictators. But really? The GOP candidate for president in 2016 is saying nice stuff about how Saddam Hussein was anti-terrorist?

He was a state sponsor of terror!  And I think no serious candidate would hurry to say nice things about someone who had rape rooms and torture as a part of his reign.

That should not be viewed as an acceptable level of being both not even remotely right on the facts and not even right about his own historic positions, right?

He really is dreadful at every aspect of this running for president thing.