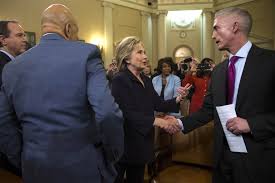 This page is very apropos to my comment, so let me just explain that this 8th investigation onto the Benghazi event has been one of the longest Congressional investigations in US history, and one of the least necessary. I'm saying that even though the Select Committee on Benghazi's very own report claims that it "Fundamentally Changes the Public’s Understanding of the 2012 Terrorist Attacks that Killed Four Americans". It does not. What they have produced is an 800 page report that is largely duplicative of earlier efforts that on balance has, as some of its weightiest criticisms, that politics played a part in statement the White House and other federal agencies made after the event, and that nothing was done to stop the tragic attacks--even though it is acknowledged that nothing could really be done in the time that elapsed and there is no real evidence that any prior concrete warning existed that such an attack would occur.

If there's any question about the part politics played in the statements made post-Benghazi attack, I'd like to point out that there's a timeline showing when this became politicized, and the answer is it happened right away, and it wasn't the Obama Administration doing it. Look at the date. Mitt Romney, the GOP candidate for president, was condemning the Obama Administration for a statement that came out of the Cairo Embassy prior to the Benghazi attack, when Secretary of State Clinton's immediate response was to condemn the perpetrators:

I condemn in the strongest terms the attack on our mission in Benghazi today. As we work to secure our personnel and facilities, we have confirmed that one of our State Department officers was killed. We are heartbroken by this terrible loss. Our thoughts and prayers are with his family and those who have suffered in this attack.

Some have sought to justify this vicious behavior as a response to inflammatory material posted on the Internet. The United States deplores any intentional effort to denigrate the religious beliefs of others. Our commitment to religious tolerance goes back to the very beginning of our nation. But let me be clear: There is never any justification for violent acts of this kind.


The Libyan Embassy had deficient security, which was in part a question of funding, but that had to do with Congressional oversight over that funding, and Secretary Clinton herself took responsibility for the handling of security and changes were made.  This is how things are supposed to work--but this self-admitted political anti-Obama, then anti-Clinton advert was a waste of time and money. And what do we get? An 800 page nothingburger. Oh! And a 48-page nothingburger with cheese, with all the comments partisan Republicans would have liked to stick into the 800 pages, but couldn't substantiate, so, really?

But 800 pages all on its lonesome is a major read, and gosh dang it, who reads anymore? So partisans are liable to just depend on the opinions they had before. And if your opinion was RW conspiracy-theory trash, like Trump lawyer Michael Cohen's opinion, well, you'll stay ignorant.

Even though he's just making up what he imagines the real people impacted by the horrific death of their loved one actually feels.

I hope this puts the travesty of trying to make political hay out of these dead patriots behind us, but as Steve M. documents here, some folks have even made this their bread and butter. I don't really expect it to end.