Is the Trump Campaign For Real? 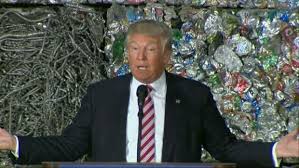 You know, when a candidate whose economic policy has already been rubbished makes a speech regarding his economic policy with a backdrop consisting of compacted rubbish, one begins to wonder if there is any political campaign-type adult making decisions in Trump-World. Oh, sure, Trump's Telepromptered delivery of some rare specificity might be partially praised for seeming in the ball park of presidential (but maybe it sounds awkward when CNN's new hire Lewandowski does it, eh? Good investment, you guys), but when you fact-check that stuff, it gets quaint in a hurry. When he talks about globalization like he was never for it, or outsourcing like his stupid Trump campaign swag isn't made in China or Bangladesh or Lesotho, he's perpetrating a fraud. The rubbish back-drop might just be the most honest thing about it.

But the vision of The Donald in his Bobby Jindal-ish candy cane tie with the backdrop of crushed tin cans offsetting the green notes of his hair and orange notes of his skin shouldn't be the main takeaway here--oh no!

The point is, his campaign is a hot mess. For example, they got hold of an email list from who knows where--Heritage or something. And then they started spamming UK MPs for campaign donations. It's not actually legal to solicit donations from foreign nationals for US political campaigns, but this is Trump-World. They just don't know to strip out those emails. They don't know.

It gets worse, of course. In light of the terrorist bombing at Istanbul's airport, Trump performed actually as his responses to Orlando and previous events would have led us to expect--he tries to capitalize on the opportunity without even the empathy to acknowledge the enormity of what took place. And he's lately on a weird kick about discussing things in terms of rape metaphors. So maybe the optics of having non-political convention speakers like convicted rapist Mike Tyson is really also weird? Or maybe even downright pathological?

The Trump campaign is so uniquely and specifically and variously and terrifically fucked that it is hard to treat as being real. And yet it is. It is.

Posted by Vixen Strangely at 1:12 AM

Trump has substantial interests in Scotland, and some dodgy business in Iceland, so it's reasonable to think that the Trump Organization has contact info for all their politicians. My first thought when I read of these pointless and illegal e-mails was that Trump's staff just "sent" to every address they had, without filters. Very amateur, very "not good," very much what I would expect from an organization too cheap to hire competent, experienced staff - or where the competent advisers are ignored, because Trump and children "know better"?