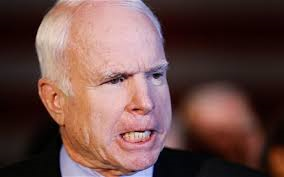 As you all probably know, Senator John McCain is facing his second re-election race since Obama beat him in the 2008 race for the White House. It hasn't been easy. And it might not get better. The fact of the matter is, the top of a national ticket matters, and if the AZ Sen race seems to be close (or has his opponent, Ann Kirkpatrick, with a slight lead) the reality is, a fairly unpopular, not to say unqualified, GOP 2016 presidential candidate like Donald Trump--the man who got something like five Vietnam deferments and had the nerve to question McCain's own war hero status--could have a negative impact on his re-election chances.

But that doesn't mean the long-time Senator, with an underserved record of consistency and "Straight Talk", can't try to capitalize on Trump-sounding rhetoric. What McCain tried today was a bit of a Muslim-bait and switch--he blamed President Obama personally for the Orlando attack, calling him "directly responsible" for the murders. Then, before everyone had the chance to work out that the roots of ISIS started with the Iraq War and that the SOFA Obama was adhering to was for total withdrawal by 2011 and was signed by President George W. Bush, McCain tried to backpedal and explain. In a way that basically reinforced why what he was saying was bullshit. But as I linked to back in my 2008 criticism, there's a precedent for that kind of weasel-y Muslim-baiting.

Which is all just my round-about way of pointing out that while some Trump comments appear unique--they have a solid GOP lineage. McCain has been part of the problem long before the "Trumpening" of the GOP. Heck, he damn-near prepared the way.
Posted by Vixen Strangely at 12:08 AM