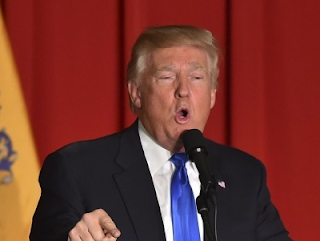 There's something very sad(!) about a guy who isn't worth as much as he says he is, who has to concentrate on tearing others down because he hasn't actually got anything great to say about himself. Take Donald Trump in his weak and antiquated attacks on presumptive Democratic nominee, Hillary Clinton:


Gross. I'm not even sure how he thinks she's to blame for any of that.


And let's talk about Dirty Don's stupid talk about Vince Foster. He wants to say this suicide that happened 23 years ago is "very fishy". This is sleaze, actually. This is aged sleaze. This is how conscienceless douchebags in the early 1990's used the stiff body of a Clinton friend to try and bludgeon them.

Trump has plenty of sleaze of his own. I don't know why he decides this is the topic he needs to advertise. But deciding to throw in with every piece of anti-Clinton made-up sleaze only helps me dismiss his seriousness. He is not serious. He's sleaze-merchandizing.
Posted by Vixen Strangely at 1:40 AM