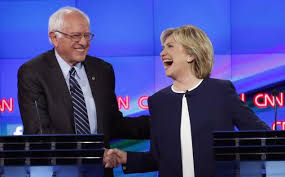 I'm going to reiterate my impression that the 2016 Democratic primary is basically over, because it appears we are now in the "discussing terms" stage. He's picked five, or about a third, of the people sitting for the Platform Drafting Committee, and Democrats are talking seriously about whether Rep. Wasserman Schultz should stay as DNC chair. It's already understood that as a Senator, Sanders has some say over a Clinton cabinet, but as her main primary opponent, I guess his word has a bit of weight (but not ultimate veto power--how would that even look?)

But the actual "fight" doesn't appear to be laid to bed yet, either. Sanders has called for a re-canvassing of the votes of the narrowly-decided Kentucky contest, but I'm not entirely sure to what end. A "win" might only change the allocation by a couple delegates, and that's not nearly what he needs.  There's also some hard feelings over Clinton declining to debate Sanders before the CA primary in a format televised by Fox News. Well, she agreed to another debate but I can't think of a reason in the world why she wouldn't balk at doing one hosted by Fox goddamn News before CA. Perhaps Team Sanders is hoping a California debate will do him all the good the Brooklyn debate did for him in the NY primary? (Clinton already leads there, as she does in New Jersey. It's over regardless, Sanders is no longer at the point where an upset a la Michigan does him much good--not without something really catastrophic happening, and what kind of weirdo is actually banking on that?)

What Sanders is getting for his admirable stick-to-it-iveness is a lot of credit--to a point. He's already stated that party unity is Hillary Clinton's job to align--not his, and makes a point of saying that "Democracy is messy".  Do I ever sympathize--what's the saying? I know I don't belong to an organized party--I belong to the Democratic party. I'll already admit that getting some Sanders backers and Clinton backers on a similar page (much less the exact same one) is going to be like herding cats. But I am not sure I see the point in the protests that are being planned.

I live in Philadelphia, born and raised. This city is both very Democratic, and not at all tolerant of fools. There are ways to do intelligent protest here and I don't count on outsiders to not fuck it up. And I don't even know what concession they might want, other than the crowning of the guy that did not win the nomination. Which is not either small nor large "D" democratic.

Maybe Hillary Clinton isn't, in the world of the woke, as entitled to a party-centered love-in like Barack Obama got in 2012--although you might need to point out for my particular personal edification and benefit where she is politically and policy-wise different from him (bring lots of notes--it will amuse us for hours). She may be flawed (as folks are) and battered, like people who survived a couple of decades of unfair and deeply personal attacks are; but nota bene: Bernie Sanders is not immune to oppo or character assassination in the press. Team Clinton just never had to do him like that to win.

The revolution isn't one battle, but a lot of them. Sometimes you don't vote for your best friend, but against your mortal enemy--and for some people, this election is a mortal issue. Is your pride or your adopted principles worth more than the creature comforts of someone less privileged than you? Are you fucking shit up for "their own good"--or yours?  What I am saying is--

Posted by Vixen Strangely at 1:01 AM

Hi Vixen, often I find that the most important things are not noticed or go by the wayside.

There are real revolutions taking place within the left and the right that have far-reaching ramifications.

On the left the liberals are having a conflict with the progressives in the Democratic Party. Finally a distinction is coming to visibility that there are 2 different positions.

When Charles Darwin first published his theories, a lot of early socialists were enthralled. They saw the evolution of species as a kind of “progress.” They thought that if you can have progress in species, maybe you can also have progress in societies.

This was the origin of “progressivism,” and at the time they were probably correct. If you consider, say, British society. First you have a monarch, then a House of Lords, a House of commons, and then more attention paid to people in horrible circumstances.

About 25 years ago Francis Fukuyama wrote a book that caused controversy when he asserted that Western society had gone about as far as it could with that kind of “progress.”

This is true. For example, today you can't change society in one way without stepping on the toes of some other sector of society.

Back in the day there was some evolution in societies, but today everything is at the expense of something else.

Naturally when Marx came along, these “progressives” saw the “progress” in communist terms, and so they started to try and push societies in the direction of a Marxist model. Well, like Darwin, of course, Marx has also been discredited in many elements., and so that form of “progress” is no longer tenable or even desirable.

Bernie Sanders calls himself a Democratic Socialist. One of the big differences between communism and socialism is that while they share a similar distribution system, socialism allows for free elections. The problem is that since the money is all distributed, people do not have enough of it to have power. You can hand out pamphlets in front of the drug store, but you cannot get together a huge sum of money from contributors to push for real change, because the government has all the money and therefore the power. You can rant, but you cannot really accomplish anything, because the government controls the means of production.

Bernie has forced Hillary too far to the left to fit into the United States' liberal model. Hillary would not have done this on her own. God knows, the Clintons love money. Hillary is on the left side of American liberalism

American liberalism believes in trying to borrow government as an instrument of assistance to individuals and groups, but also believes in capitalism and stops short of redistribution of wealth.

A short time ago, JFK , Stephenson, and Humphrey were classical American liberals. And no one accused them of wanting to undermine American society or of being antagonistic to America's economic system simply because they were liberals.

The radical Marxist influence of the “New Left” became all-persuasive in the 1960s. And progressives have found an echo of their advance in this revolutionary ideology. Marx said that eventually a worker's paradise would be created, and money would no longer be used as a medium of exchange. He said that this would eventually happen on its own, but if people were not content to wait they could push it through with violent revolution.

When you read about the bombings committed by the Weathermen Underground (I had friends in SDS who knew some members of the Weathermen) and other violence in the 60s, they were attempting to follow the Marxist dictum of pushing through a Marxist utopia by violent revolution.

This all collapsed for a lot of very justifiable reasons, but it created an intellectual influence that to this day continues to separate American liberalism from the concept of progressivism.

The Democratic Party needs to return to American liberalism in part because the platforms that supported the progressive movement have simply not worked, or are outdated and no longer satisfy the needs of an effective model.

And this is why if conservatives can't win, I would prefer Hillary. I have the same views of Hillary that most on the right have, and I regard her as a very undesirable person. However, she does manage to squeeze into the category of being an American liberal, and would probably even be more suitable if Bernie were not driving her to the left. So I don't support Hillary by any measure, but I would certainly take her over Bernie any day of the week.

I think P J O' Rourke summed up a good conservative reason to back Hillary Clinton over Trump--"she's wrong, but within normal parameters". Even if one doesn't buy liberalism or liberal arguments regarding the value of statism and the ethos of "It takes a Village"--Hillary Clinton makes sense within historical liberalism and isn't liable to overthrow historical norms just to prove she can.

One of the "selling points" that hard-core Sanders fans have expressed for their guy is that he currently has better poll #'s (in a limited way) versus Trump than Clinton does. What Clinton backers have patiently tried to explain is that Hillary Clinton never ran a negative campaign, and never hit him on anything but on whether she would be *better* in having a more developed policy answer and a more broad *and* granular understanding of US standing in the world. She never brought up some of his more Red-friendly pronouncements, and indeed, a liberal would be accused of "Red-baiting" for ever pointing out what a Republican would do with his sentiments about Castro or the Soviet Union.

While these impressions might be deemed "unfair" to bring up, they are also public record and while it might be very bad form for a fellow lefty to "red-bait"-- no person in their right mind could think that accusations of Communism would be missed in a post-convention Trump/Sanders battle.

"Neo-liberalism" has become a slur against Kennedy-esque lefties. I'm not sure I like that very much at all. I don't think a left isolationism makes any more sense than right isolationism ever did when we aren't even dealing with the cold war anymore, but NGO Terror-based orgs. I think we can develop a good response that protects US citizens' safety and interests, and still respects human rights. This kind of neoliberal thought I hope isn't deemed too hawkish. I just basically think terror orgs (Daesh) have approached a philosophical point where nothing but the individual breathing permit of their members getting stamped "final" breaks through.