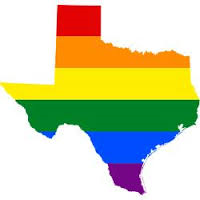 In the order Judge Guy Herman said parts of the state's family code and state constitution, "...are unconstitutional insofar as they restrict marriage in the state of Texas to a union of a man and woman... because such restrictions and prohibitions violate the Due Process Clause and the Equal Protection Clause of the Fourteenth Amendment to the Unites States Constitution."

Dozens of religious leaders and supporters of same-sex marriage gathered outside the capitol Tuesday, saying it is an issue of equality and love.

"There's nothing to fear, and everything to gain, by treating all our citizens with dignity, respect, and justice under the law," said Eric Folkerth, a pastor at Northaven United Methodist Church in Dallas.


I know, Alabama is a huge stepping stone, as was Iowa. But just in terms of sheer geography, this is one big area for marriage equality to begin--and once begun in any area, the battle is nearly done because people begin to see those happy couples starting their new vows, and realize this isn't anything that does harm to any relationship they have, unless of course, they are a lawyer or part of a political action group that is against gay marriage--it might affect their relationship to getting paid for discriminating. Those people, I guess it affects a lot. Otherwise, marriage equality is not a detriment to anyone else at all. It's just equal treatment under the law for consenting adult partners.

We are on our way to full legalization--and I like what I see.
Posted by Vixen Strangely at 1:09 AM