Does Jeb Bush Want to Be President? 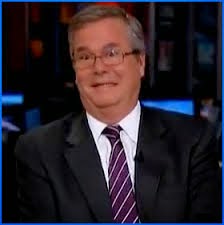 After seeing some of the pans former FL. Gov. Jeb Bush got from his fumble-tongued national security speech (Beaucoup Haram? 200K ISIS fighters?) and taking note, as everyone did, that Bush's foreign policy team has significant overlap with his father's and brother's advisor-pool, I seriously wonder about this whole "Jeb Bush running for President".

The man has probably at least mulled over whether he's wanted to be president or not since his brother ran in 2000. That's a long time to be thinking about doing it. But getting elected is one thing, and actually being president is something quite different. No matter who advises him, once he's "the Decider", as his brother famously put it--he's really got to show he knows what he's doing.

He has every bit of hindsight available regarding his father's and brother's administrations--successes and failures alike. He has had the opportunity to audit the current president's administration to contrast how he might do things differently. But I'm not sure he's made use of those things, and that really bothers me because national security is kind of important, you know? I just think he's running because it's the "family business" and he's expected to--and that's not good reason enough.
Posted by Vixen Strangely at 6:56 AM

He could be choking on pretzels, invading innocent countries...Living the dream!
~