I'm Not An Expert in Terrorism, But... 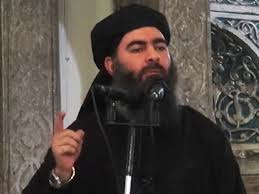 Weighing a handful of opinions altogether regarding "what ISIS really wants", as is the title of Graeme Woods' piece for The Atlantic, I'm afraid I want to back up from part of the main premise--that they are apocalyptic.

I'm not just looking at what Nihad Awad has to say about it, although his point about these being desperate people with no belief in worldly justice strikes me as exactly accurate. But leaving aside whether ISIS is drawing directly from Islam (and sure, maybe, enough of it is "really Islamic" but I'm not qualified to speak to that religion--I think it's more in the way Aum Shinriko is Buddhist, or the Rajneeshis are Hindu) if one were just looking at who is recruited and what they are doing, I think one would get a far better picture of what they are about than from taking their religious-flavored propaganda at face value.

A group doesn't act as proponents of violence, rape, slavery, and wholesale execution in job lots because they think its holy to do so. A group doesn't recruit from semi-criminal internet-addicted mommy's basement Jihadi-come-lately's because it thinks it has a powerful prophetic message to pass on. What they want is power, and to create zones where they have real control. They perform job-lot killings in slick videos to project that power to the kind of people that sort of thing would impress, when the glossy Caliphate pseudo-history doesn't go down for everybody. But they don't think they are heralding the end times--because really, does anyone?  It's a sham.

Connecting them to the world of Islam as if they were always belonging as a kind of pernicious Wahhabism that would inevitably turn sour does strike me as giving in to their foundation myth. Cutting them off as just a cult of nutters that isn't anything like decent Muslims makes a lot of sense to me. It also strikes me that their kind of image-projection as being an advancing organization capable of real horrendous acts to prove their bad-assery genuinely requires their asses being handed to them serially and consistently. And it would be great if this was led by Jordanians, Kurds, Egyptians to further highlight what freaks they are considered by so many people who legitimately practice Islam--not by Westerners. But they aren't inextricable. They're just obnoxious. And my opinion is, the idea of the "true-believer" with this group is likely overstated. They'd like to be. But that's all. I don't know what pressure will bring out self-biting shithouse rat lurking within the org, but I believe that's what will result from a proper harrowing.
Posted by Vixen Strangely at 12:04 AM

Hi Vixen, naturally I'm familiar with the movements you mentioned, as you might imagine.

I think a more serviceable and congruent comparison would be to the Ku Klux Klan and the Irish Republican Army.

Before Jerry Adams and Sinn Féin decided to become part of a political possibility, they were blowing up people, blowing up department stores in Britain, shooting people down, beating people to death, and slicing throats.

Not every Irish Catholic in Belfast or elsewhere would have participated, however many were sympathetic. The IRA had bag men in Boston and the east coast where Irish Catholics who were IRA supporters would regularly contribute to the cause. Many of them were basically good people, and they would never have committed violence themselves, but they were sympathetic. And there were a lot of them, so you have one large segment that willingly commits violence, and an even larger segment who are basically in agreement to a greater or lesser degree.

The Klan that started in 1939 bore little resemblance to the original Klan that was organized after the Civil War. The 1939 Klan was a terrorist organization whose members rode around at night doing atrocities. Only a certain number of citizens would actually be part of violence. However, there were a lot of Southerners who very regrettably were sympathetic to one degree or another.

It will be a long time, if ever, for a significant number of Islamic fundamentalists to stop being sympathetic with the idea of killing the infidel. Or a more moderate approach of not wanting to kill the infidel so much as set up a caliphate in the West and force the infidel to accept Islam without necessarily eliminating the infidel.

Christianity with its message of love and forgiveness tempered the old Mosaic law of an eye for an eye and tooth for tooth, stoning women, and other Old Testament acts of violence in the name of the Old Testament God. Islam has no religious movement that superimposes itself on original Islamic teachings and changes the way the teaching is seen.

There are sleeper cells in the United States waiting to be activated, and right now Islamic fundamentalism is being allowed to grow. God help us if we do not start repudiating this movement more forcefully than we have recently.

I think your analogies with the KKK and the IRA are more apt, because there is a strong political bent to what they're trying to do as well. ISIL is a still-evolving org.They have already taken on different tactics than al-Qaeda, and have seemed to be concentrating on expansion. The thing is though, if they mean to hold territory at their current strength of about 20-30k in country, that's got to take a different skill set.

Terror thrives in a chaotic environment which is why failed or weak states are breeding grounds. But holding territory means making something like government happen--while also constantly fighting. It serves in part to explain why they've gone in for massive oppression, but it's also the kind of thing that will make people revolt against them. If funding, arms and recruitment for ISIL can be dried up...

There's definitely an ideological challenge here, not just a military one.