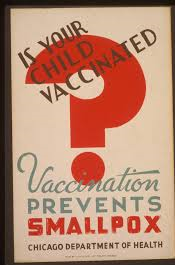 Just to stay with the topic of vaccination for a moment longer--today a handful of possible presidential hopefuls made comments about where they stand on vaccination. Now, I guess my last post tells you where I stand. NJ Gov. Chris Christie expressed a need for "balance" regarding vaccination--which was elaborated as follows:

Christie, however, said, “There has to be a balance and it depends on what the vaccine is, what the disease type is, and all the rest.” He added, “Not every vaccine is created equal and not every disease type is as great a public health threat as others.”

Hm. I'll admit I don't get a flu shot, myself.  I have the social schedule of a shut-in and don't regularly deal face-to-face with the public. But even so, I'd definitely get one if I dealt with kids or the olds. Even if the flu shot isn't 100% effective--it would be worth it to reduce the likelihood that I'm going around infecting people who, unlike me, aren't strong as an ox and wouldn't shake the flu as easily. But I kind of think he isn't signifying about things like the yearly crapshoot that is the flu vaccine. I'm not sure what he's talking about. The MMR vaccine is the topic of the day, and it's very effective. But you know...the HPV vaccination was a little controversial, no?  (As in, yes, as in, why do people think they can be taken seriously if they just quote some anecdotal stuff from random acquaintances?)

KY Sen. Rand Paul also had some things to say about vaccinations, and the possible link to "profound mental disorders". That connection? Not at all proven. Correlation is not causation. Besides which, Rand Paul hangs with Alex Jones who thinks there is a weather machine. That's only a couple hops from worrying about the lizard-people who run the UN.

But Dr. Ben Carson, who, don't get me wrong, says a lot of things I don't agree with, makes the overall point of why vaccination is important:

“Although I strongly believe in individual rights and the rights of parents to raise their children as they see fit, I also recognize that public health and public safety are extremely important in our society,” Carson said in a statement to BuzzFeed News.

Carson said diseases of the past should not be allowed to return because of people avoiding vaccines on religious or philosophical grounds.

“Certain communicable diseases have been largely eradicated by immunization policies in this country and we should not allow those diseases to return by foregoing safe immunization programs, for philosophical, religious, or other reasons when we have the means to eradicate them,” Carson said in the statement.

The history of vaccination in this country and the western world is a real medical success story.(I have such a beef with the CIA for screwing up the anti-polio cause in Pakistan.) Removing some potentially deadly form of human misery is a genuinely noble cause--it's what medicine is for. There's no reason for people to be ignorant or fearful of supposed and unproved dangers when the benefit of not having these epidemics is very real. No one lives in a bubble where they can be kept apart from people from whom they may catch diseases or to whom they may spread them. It's just the way things are.

I can appreciate some of what medical skeptics say about over-medication, over-diagnosis, and the tendency of the medical profession to treat symptoms and not really examine underlying causes, and to prescribe to patients without working with them--my family history has heart disease, diabetes, and auto-immune issues, and I am critical of how those chronic issues are looked at. But how should I put this? Not all skepticism is created equal. Regarding vaccination--I think there is no "there" there.

I look at someone like this anti-vax doctor, and I just shudder. He does not care if his unvaccinated kids make someone else sick because his kids are "pure"? What kind of purity is that? Does he see immuno-compromised people who might get sick because of his kids as "culls"? Does he think his un-vaccinated kids are stronger because their immune systems are unexposed--uh, so far? That's just magical thinking. I think his bullshit is pretty pure, and his kids are being needlessly made an experiment of to prove his interesting ideas about "purity".

But to take it a little further--looking at it as risk to benefit, if it isn't worth vaccinating for measles, is it for polio? Was eradicating smallpox worth it? And what about tetanus, also known as lockjaw? We don't generally recall what those diseases were like when they were flourishing--but take a long look back (you know, the Google). They were/are devastating. I can think of no good reason to subject anyone to the opportunity of catching them.

Edit 2: Here's Rand Paul, who says that parents own their kids, getting kind of paranoid with Alex Jones about vaccinations.  Also, his old man seems to have been in the same vein.
Posted by Vixen Strangely at 12:21 AM

I do intend to ask my doctor if he accepts anti-vaxers as patients. I'm not speaking of those who are medically unable to take a vaccination but to those who are too butt-stupid to protect themselves or their kids. If he does, I'll probably switch.

I'm 66 and never have had the MMR diseases. I'm going to check with the doc to see if I should be vacinated.

A couple people at my work were talking about checking with their doctors to make sure they had gotten all their boosters. Bad as these diseases are for kids, they can hit harder and take more recovery time for adults.