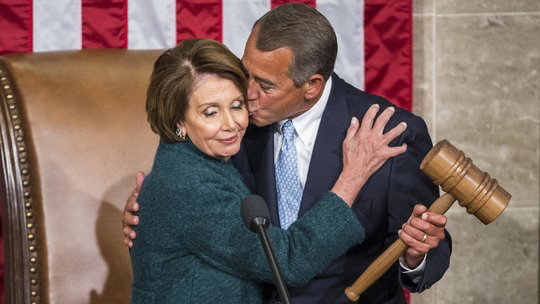 So, Rep. John Boehner hangs on as Speaker of the House with only 25 votes against him (that came to: 3 votes for Rep. Gohmert, 2 for Rep. Yoho, 1 for Sen. Rand Paul, 1 for Sen. Jeff Sessions, 2 for Rep. Jim Jordan (OH), 12 for Rep Daniel Webster --good for him, huh?--and then some other guys). If the challenge to Boehner's position as Speaker was intended to send a message, Boehner is apparently sending a message back.

What's it all mean? I don't know, the year is young. If I was to guess from looking at the names of the guys who got votes in this "rebellion"--I think Formerly Amherst is right and they seem to be mostly anti-illegal immigration folks. With GOP control of both houses of Congress, I don't think it's out of the question that some kind of immigration reform gets passed just because the GOP wanted to be sure they got the border security aspect the way they wanted it. As a liberal, I don't think I like the idea of a "deport everybody" scheme when we do have solid, but undocumented people who otherwise are good citizens in all but the paperwork; but I appreciate the idea that cross-border traffic includes some unpleasant criminal realities we don't want, and that the economy doesn't benefit from "under the table" jobs going to undocumented (which can also mean "unprotected") workers when those businesses should be playing by the rules and hiring on the up and up.

As for the above picture--that is awkward, no? I'm just saying. Minority Leader Pelosi is smiling, but her right hand is kind of saying "Nope".  (Or is that just me?)

Posted by Vixen Strangely at 10:45 PM

Hi Vixen, you have sort of swerved into a matter that is only discernible if you grow up in our culture around the border.

The fact of the matter is that a large percentage of the people concerned about illegal Latino immigrants are themselves Latinos with family ties to Mexico.

The press would suggest that there is this ubiquitous group of white people that want to forcefully keep Mexicans out.

The truth is that all the border states at one time were part of Mexico. A large number of citizens actually have Mexican lineage, and since the early days Mexicans have been coming across the border to “El Norte”, working, living, and sending money back home for as long as we have been around.

Quite a few of the people concerned about illegal immigration have family ties in Mexico.

One of the common conversations I have with Mexican-Americans, male and female, is how scary the proposition is of going down to Mexico. They used to go see grandma, grandpa, and the cousins, and now you take your life in your hands if you go south of the border. My own family, though not Mexican, has been vacationing in Mexico for generations. You're not going to catch us going there now.

One of the rocks the Democratic Party tripped over in the last election was that it turns out that the Mexican population here vote more or less the same way the Anglo population does. After all, their families have been in the states legally since the 1800s.

So there is a very easy and understood free flow of citizens passing back and forth along the Mexican border. For a hundred years this has not been a problem. The whole Southwest culture is a mixture of cowboy, Mexican, and American Indian sensibilities, cuisines, and languages. However, recently because of staggering amounts of violent crime and an equally staggering number of Mexicans wanting to game our system and send much of the money back to Mexico, alongside of the huge number of illegals who do not speak English and maintain separate cultures, it has become a problem.