This is Not What "Exceptional" Means 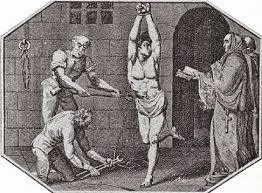 The release of the Senate Select Committee Study of the Central Intelligence Agency's Detention and Interrogation Program reveals things we basically already knew or should have known about the CIA program--it was worse than reported, it yielded little to no useful information, and it was run by liars who repeatedly tried to project that they were not performing acts of torture when they were in all actuality, textbook acts of torture.

There are people who seem to believe that releasing this information somehow endangers Americans here and abroad. Since this report details things that actually happened, I would say that the actual program of torture run by an agency of the United States government is what was actually harmful. Much of the information had already been reported in news publications; this report is just filing in the blanks. For that matter, this is just what was unclassified after certain details had been scrubbed, leaving the possibility that there are things yet worse that we don't know--but what is here is pretty starkly disgusting.

It has never escaped my notice that the use of torture is not reliable and has the potential for severe blowback--this was authorized by people who should have known those things. The program was devised by people who should have known better (and got paid some $81 million to not know better). If torture was used by the Inquisition to get people to confess to cavorting with demons, or by the Reds to get false confessions out of captured soldiers, why would it somehow become a force for getting truthful confessions from detainees in the GWOT? It simply makes no sense that battered and broken people who are dissociated by their treatment are now going to impart reliable intelligence. Because why? Because we're so nice? No! They'll lie their asses off to save what remains of their hides! And as far back as the Revolutionary War, George Washington had stern things to say about torture--he believed it brought disgrace on the nation. And so it does.

The fear of discussing this doesn't seem to be about repercussions from terror groups like ISIL, who don't love us to start with, and are a nice little pack of torturers, beheaders, slavers and rapists anyway, and so have no huffy high ground to claim. It's rather about confronting the evil that was carried out in our name for no good reason, which lowered us to the level of the things we hate, and put into question our very idea of American Exceptionalism.

I've said before, if American Exceptionalism is to mean anything, it can not mean something like "Wars of choice, indefinite detentions without charges, and torture are criminal...except when we do them". To be a great example among nations, it's no good to simply have great values. We have to also stand up for those values, or the result is sheer hypocrisy--an insult to our national reputation on top of the injury to our national conscience. Siding with the program, after it has been revealed to be disgusting, haphazard, ineffective, and full of lies, is nothing more than tending to a wounded amour-propre having found one's idols were made of molded chicken shit.

Speaking of poultry-manure-based golems, former Vice-President Cheney has dismissed the report as "hooey". His gripe is that the CIA was not rogue, but that the entire operation was "authorized". So much for any attempt to play at being "out of the loop".  Cheney himself does seem to have been well in the loop on this. Which, as he's been one of the torture program's biggest cheerleaders, surprises me very little. Since the program itself is hair-raisingly illegal, I have to feel a certain frisson of deja vu in a sort of Nixonian "when the President does it, it isn't illegal" kind of way about his phrasing. But to return to my libretto--torture gets false information, as it did when Ibn al-Shaykh al-Libi made a connection between al-Qaeda and Saddam Hussein under torture. Which became the basis of a war that was at the very least, lucrative to his former (?) company.  (Although ever so much more could be said about that.)

If the principals involved in making the decision to permit these actions truly believed that they had been doing the good and right things in this country's interests, they wouldn't want to hide their light under a bushel. But these things were not done for wholesome and noble reasons of "keeping us safe", so they prefer those deeds stay in the dark. And anyhow, however were those tactics ever thought to get good results? Was becoming more grotesque than "the enemy" supposed to somehow make us "more right"?  Since anyone knowing well enough how to do proper interrogation would have disdained these very tactics for the quackery they were, who championed them? How was it supposed to work, really, to keep us safe? To get good humint seems besides the point. To exploit the flesh at hand per discouragez les autres? As some great prophylactic fetish charged with human misery?  Can someone tell me how "forced rectal feeding" was supposed to "keep us safe"?

To be exceptional, I think, is to make no exception in the law for elites who practice this kind of bullshit and to this day, defend it in the teeth of evidence it was of no practical value, and even a source of (expensive and long-lasting) harm.

(X-Posted at Rumproast.)
Posted by Vixen Strangely at 11:51 PM