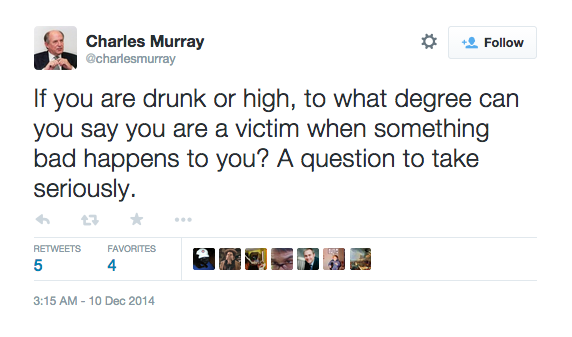 So, if Charles Murray were totally high, like, maybe being high on himself (since he seems vaporous)? And I punched the shit out of his nose because he was totally asking for it? I'm pretty sure Charles Murray would, whenever he sobered up from being high on himself, totally turn around and be all up my ass for assault. As he should be, because just being drunk or high does not somehow make a person not a victim. Is he trying to say a drunk or high victim is not a very reliable witness?

Bingo. A high or drunk person is prone to remembering things badly and out of order and can't necessarily speak to what they did or did not do to defend themselves, for example. They were vulnerable, in other words. Which I think would make them more subject to being considered victims when someone took advantage of their screwed-up state, but I dunno. Maybe he's saying being fucked up enough to be vulnerable is your own damn fault, victims, so...

Ah. Maybe credibility is situational. Maybe more than one thing about anyone's life story might be dependent on the context of their lived experience. It could be that we don't live in a correlation/causation world, but a complex grid of inter-relating concepts where the experience of rape by a drunk girl is not dependent upon her being able to totally nail the obstacle of convincing judgmental old douches of her victimization, but of our ability to glean what happened in the context surrounding her (or him--men also experience sexual assault, and are also treated like shit for being imperfect victims.)

Does anyone exactly know what century Charles Murray is living in these days? I want to say the 19th because of the flagrant racism, but the rape-apologist edge  kind of makes him a man for all really awful seasons. That question might have seemed provocative to him--but it's old hat for people who care about victims' rights and the importance of hearing them out. So. Wow. I'm taking his brand-newness to this question very seriously. Does someone ask that question as an academic legitimately not knowing where it leads? Or is he trolling the contrarian point that imperfect rape victims must be liars, or deserving of what happened to them?

Both of those possibilities seem really horrible to me.  I just curate this comment for the benefit of my readers. Because otherwise--I can't sort out what else to do with it.
Posted by Vixen Strangely at 1:41 AM

He makes his living pandering to the GOP's authoritarian, bigot base.

Probably shares their instincts, as well.
~

The thing is, why would ANYONE, regardless of their political or tribal ideology want to live in the kind of world these people are advocating? A world where crime victims are routinely disbelieved and challenged? A world where law enforcement can violently attack and even kill citizens with impunity? A world where everyone is armed, even in the most banal settings, and are encouraged not to just carry but to USE the most lethal firearms in history?

It seems to me that these radical changes to accepted norms threaten all of us equally, and as people who have to live in communities we would all have a very strong incentive to push back against them, rather than encourage and enable them.