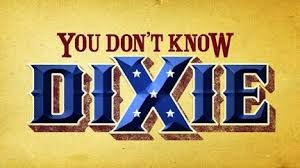 I have to demur from the opinion of Michael Tomasky, whom I agree with regularly--but, well. I just don't think one actually abandons a whole bloc of states and still considers the possibility of having a national party. If the Democrats kiss off Florida and Texas, and don't even try to play their cards in North Carolina, South Carolina, Virginia et al, we set up to lose future rounds in those states also, because we don't have party infrastructure, we aren't cultivating voters, and we aren't delivering a meaningful message.

I guess I am pretty much at the "acceptance"  stage of grief where geographical party representation stands as it does because I think that, once we really codified "red" and "blue" states in the past decade or so? Multiple maps only reinforced the idea that red states necessarily concentrate in the South, and many people tend to accept broad generalizations. But I tend to look at what's possible, and I see possibilities.

I don't think it should sit well with people in the south that the fossil fuel industries are paying their employees less to accept more risk to eke out less cost-effective fuels, that spoil the land and way of life in the region for farmers and fishermen. I think there is a real reason for people to want to speak out about systems that protect people who poison water, and punish people who speak out about it. I think there isn't any room for equivocating that we believe there should be a strong border and clear rules about who gets to stay here, but industries have to do their part by hiring US citizens on a preferential basis. I think states need to look to fairer pay structures for a tide that rises all boats, and not continuously look for tax cuts that benefit elites and screw regular people.

I still think there is a number of common interests that truly Democratic politicians could speak to in the South, if they tried. I don't see it as a national party concern, necessarily, but if local politicians build it, I guess the national party should behoove itself to come.  So I think, to put it plainly, there's no benefit in cutting and running from a challenge--no matter how challenging it may seem. I suggested some avenues of opening up a legitimate "refreshed" dialog with southern states for Democratic candidates, but up-and-coming local politicians will probably know better than I what they're about. I just don't see giving up on them.
Posted by Vixen Strangely at 8:00 PM

If the conversation were truly about economic justice and good governance, you'd be absolutely right. But in the US the entire political environment is polluted with tribal and racial hatred, religious dogma, nativism, major issues like guns and abortion and all the other external 'social issues' that serve to drive a wedge between large swaths of the population. And in the US, those populations have geographically defined centers of gravity.

And now they have succeeded in adding "Liberals" to the list of groups they hate, creating yet another artificial ideological divide to fuel political intractability. This ideological chasm cannot be solved - it's going to have to end up in some kind of separation, whether autonomous regions with different constitutions or actual separate nations - there's no getting back from where we have gotten ourselves...

Hi Vixen, I think it could be possible for some Democrats to get elected in the South, but it's not we who would need to change, it is thee.

I read some of the comments in your 'acceptance' click. Vixen, my friend, I mean this with sincerity and no hostility. You guys simply have no clue. Clueless. I mean, absolute, metaphysical, ontological cluelessness. You don't get it. You're dealing with something you don't understand.

Take the propositions that you suggested as a basis for a political campaign that might work in the South. Vixen, you do not realize how presumptuous and condescending it is to advance this proposition.

Let's say you have a politician, and we'll call him Mr. Foghorn, who wants to come to the South as a Democrat and try to get elected. Foghorn does not start telling us what is good for us, or what we should be embrace or how we should feel about anything.

The first thing Foghorn needs is to ask us what our issues are; how we feel about things, what is important to us, how we want him to represent us. Because that is what we would hire him to do, that is, to be our representative. To represent our concerns, our needs, not some agenda he has dreamed up and wants to come to the South and impose on us.

You know, Democrats ran an attractive candidate in the state of Texas named Wendy Davis. Do you know who took over her old seat? It was a TEA party candidate. Do you know why she lost so dramatically? She never tried to address the issues that are important to most people in the South. Also she knew that she would have opposition from hard-core anti-abortion groups, but she completely ignored the vast middle who are not single issue voters and who generally lean against her abortion activism.

She did not address anything about what she wanted to do to help the majority of regular people who are largely not political wonks and do not care about insider fights in Washington. Regular people hire representatives who are going to address their needs.

For example, you cannot get on the stump and say, “Mom and Dad, as you look down at the miracle of that new baby lying in its crib, I want you to think to yourself, 'We have white privilege and we feel guilty and we have to make sure that that young baby of ours, little Janie, feels guilty and knows she has white privilege.' Vote for me, candidate Foghorn!”

You cannot say, “All you nativists and idiot Jesus Land people who just gathered around last night at the funeral of your grandmother, fervently depending on and praying to Christ for the salvation of her soul and the comfort of the bereaved family that their belief in God is stupid and there's something pretty primitive about all of them for believing this nonsense. Remember to cast your ballot for me, candidate Foghorn, if you toothless rednecks can figure out how to get to the polls.”

I could go on, but I'm sure you get the drift. The first thing to do is to consult with James Webb to try to begin to get the vaguest notion of the universe you're in when in Jesus Land, and Jim could tell you. There may actually be some liberal solutions to some problems that are honest and reliable. And if candidate Foghorn actually learned something instead of trying to bring his leftist agenda into an entire region of the country that just repudiated everything about that agenda, you might start to get Foghorn elected. Remember, you don't change the world very much; it changes you.

I hate to be misunderstood! You know, Formerly Amherst, I look at politics as a game in some respects--I don't like that I do. But there are strategies that win elections, and if you somehow read what I said as being in favor of putting an agnostic culture-war carpet-bagger up for office anywhere in the South, you'd pretty much have the opposite of what I'd consider a "winning strategy". I said:

I still think there is a number of common interests that truly Democratic politicians could speak to in the South, if they tried. I don't see it as a national party concern, necessarily, but if local politicians build it, I guess the national party should behoove itself to come. So I think, to put it plainly, there's no benefit in cutting and running from a challenge--no matter how challenging it may seem. I suggested some avenues of opening up a legitimate "refreshed" dialog with southern states for Democratic candidates, but up-and-coming local politicians will probably know better than I what they're about.

What I think the problem with most liberal commentators and strategists is looking at the south as some kind of geographic alien territory or thorny problem in need of solving from outside. This strikes me as weird. We have this handful of states that are part of this country, and there are even registered Democrats living there. We've got people--people have interests. The "kitchen table" concerns about earnings, savings, pensions, and overall well-being in terms of access to health care, and freedom from want in those cases where artificial want (like that West Virginia several days' blackout on drinking water or the BP spill's privations on Louisiana fishermen) is created by corporate carelessness--are things a Democratic candidate can weave into a solid narrative with grassroots support that touches the national party feeling without being crafted by it. I don't think challenging culture is an election-day winner, but local pols would know how to pick around that minefield better than I would.

You're right, Vixen. I was responding as much to your 'acceptance' click as I was to you. Kind of the body of leftist opinion, which is often as bewildering to me as I'm sure Southern sensibilities are to you.

You know, the gracious and lovely Alicia and I are slightly startled when we recognize that we're the last generation that remembers what it was like to live in a sane America.

Before the 60s America was flawed, but also sane, at least if you were an average family growing up in average America. I believe you referred to it as entropy at some point.

Once we got around to addressing the flaws, we inadvertently destroyed the sanity. (Do you realize that people used to avoid talking about religion and politics, simply because they were topics that could lead to unpleasant feelings?) You could pull up to a stop light in any city in America and have a pretty good idea of what was going on in the mind of the guy or gal in the car next to you. Anyway, I won't bore you with all this, but it's kind of tough if you are part of the generation that actually saw and tasted and lived in sanity without even knowing it.

I wish it were possible to remove the scorn and the hatred from the public square. All they do is mount up greater hurdles for any kind of reconciliation.