Darren Wilson Would Do It Again 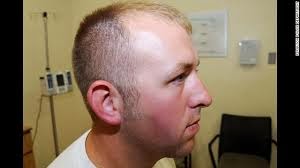 One of the things that bothers me about a vigorous defense in cases like the shooting of Michael Brown is that there is a line. Call it a "thin, white line", where a slight amount of untruth might be tolerated because everyone is entitled to a defense and facts can be slippery in fast-moving judgment calls, but there is an area beyond that line.  And I think this is where we've been taken with Mr. Wilson's defense. Because when we got to see his supposedly battered puss in photos released shortly after the non-verdict, the only thing I could think was:

"Shit. Even George Zimmerman looked more jacked up than this guy."

I don't know what to make of it, except to think he visited a hospital to have a bruise looked at and a prescription for the OTC pain remedy Naprosyn ordered to create a very-needed paper trail.

Then there's this little bit of testimony:

Wilson told Brown to “get the f— back,” but Brown allegedly hit Wilson in the side of his face “with a fist…. There was a significant amount of contact that was made to my face,” Wilson testified.

Wilson, who weighs more than 200 pounds, said he grabbed the 6-foot-4-inch Brown. “When I grabbed him, the only way I can describe it is I felt like a five-year-old* holding onto Hulk Hogan.” Thoughts raced through Wilson’s head, he said. “What do I do not to get beaten inside my car?” he said he thought.


I dunno--be in control of the situation in the first place? Not apprehend someone for jaywalking? Brown also couldn't possibly be going for a gun unless some fool decided to hold a gun on a jaywalker? Another point--Darren Wilson is also 6'4", himself. A five year old holding onto Hulk Hogan? And there's this:


Nothing. “It just clicked,” Wilson testified. “I pull it again. It just clicked. At this point, I’m like ‘why isn’t this working,’ this guy is going to kill me if he gets ahold of this gun.’” It finally goes off and the car’s interior explodes with shattered glass and globs of blood. Wilson looked at the unarmed teen and the teen looked back. “He looked up at me and had the most intense aggressive face. The only way I can describe it, it looks like a demon, that’s how angry he looked. He comes back towards me again with his hands up.” But then, Wilson said Brown hit him again, and the cop couldn’t get his gun to work. It clicked again, until it finally discharged a second time.

Don't that beat all--people make contorted faces when they are shot. It makes them mad, hurt, angry and lots of things. (And when you do it six or more times, your person is very, very dead.) But "a demon"? The guy you just shot? And then, after exiting the vehicle and sprinting for a bit, this demonic, Hulk Hogan sized prodigy did something quite bizarre:


“He was almost bulking up to run through the shots, like it was making him mad that I’m shooting him,” Wilson said. “And the face that he had was looking straight through me, like I wasn’t even there, I wasn’t even anything in his way.”

Where by "bulking up" one is to assume "acquiring an impervious exoskeleton"? I'm not a lawyer, and I could make spaghetti from this farina. Robert McCulloch made all this into reasonable doubt, because, to reiterate, he was running defense. But if you want another insult on top of all this injury to justice, here's a piece from the recent interview where he said he wouldn't do anything differently:


"I don't think it's haunting," Wilson said. "It's always going to be something that happened. The reason I have a clean conscience is that I know I did my job right."


Ferguson has been lit up since August. This numbnuts has no idea that shooting that kid multiple times while he was some distance away until blood was streaming in the street might possibly not be a good thing, all things considered? Ah, but why should he see it that way? He got a paid vacation, got married, has gone on with his life, and over $400,000 has been raised for his defense, some by brother officers who wore "I am Darren Wilson" bracelets as if that did not signal to the populace they serve that they, too, would kill an unarmed man, and some in other ways? Lots of lines have been crossed, here. The rage people are feeling over this episode is purely justifiable, and even more so since this incident is by all means not isolated. Not at all.

*There is foggy evidence indeed that Wilson knew shit about the alleged cigarillo heist. And many other reasons to think his story is highly suspect.

*As another shocking addendum, did you know more kids 5 and under died from guns in 2010 than LE officers? I'm not applauding anyone getting killed, but I think that is a sign we have a seriously fucked up culture.
Posted by Vixen Strangely at 11:55 PM

Every professional who is trained with an automatic pistol is drilled repeatedly on what's called "Tap & Rack", more colloquially known as TRB (Tap Rack Bang). See, the weakness of an auto when compared to a revolver is a when you encounter a failure to fire. With a revolver, you don't even think about it, you just pull the trigger again, rotating the cylinder and bringing a fresh round under the hammer. But with an auto, training is to immediately react to a failure to fire by striking the magazine on the bottom to make sure it's seated correctly (Tap) and operating the slide to clear the chamber and bring a fresh round into battery (Rack). It's inconceivable that a trained shooter would just pull the trigger again, and it's VERY unlikely that a round that failed to fire would then ignite correctly.