I Just Watched A Video of a Kid Getting Shot 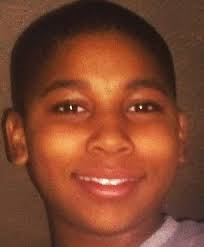 I knew I wouldn't like what I was seeing, but I decided I should see how quickly a kid playing with an airsoft pellet gun gets turned into a victim by a rookie cop. If you have the spoons, you can see for yourself--it's over faster than you'd even imagine, and that's what's gutting.

Not a pause. There wasn't time to identify themselves or shout a question at the boy. They could not have taken the time to tell him to put it down and make sure he did it before that kid was gone.

And what does the local news try to push? That he came from a home with a violent father. His father didn't kill him though, okay? And any kid who watches tv or plays video games has a sense of the gun as a symbol of fighting. They play-act. Kids play cops and robbers with toy guns. Sometimes they even idolize the cops. Sometimes kids might even approach a police car because they don't realize they themselves might be seen as a threat.

It only took a minute. The surveillance video has him playing and posturing by himself and not hurting anybody, and a cop car comes, and the boy falls, and a gun is held on a dead boy.

It isn't the first time I've seen footage like that of a shooting, and I wish I never saw it--only I wish it was because it didn't happen and not because I cared enough to look. It was over so fast. How does a life get lost this fast? Just, how?
Posted by Vixen Strangely at 11:48 PM

I think the answer to your question, writ small, is cowardice. It's a bit bizarre. In the old days, cops had a service revolver and a balky old radio. No armor, no rifles, no advanced GPS tracking and response support, no high capacity .40 Smith autos, just a member of the community in a uniform out doing his job. And that guy was famously fearless. He didn't kill. He talked, and when it was necessary he thumped a miscreant with a baton or nightstick. He didn't back down, and he didn't just open fire - he accepted that the rules gave the other guy the first break, but that was the job and you couldn't just start shooting - you used your command voice and you attempted to end a situation without anybody ending up dead.

Now, with all the tactical armor, weapons, communication, air support, advanced management software and training that goes into creating cops, their tolerance for risk has declined nearly to zero. As I have been harping, a big part of the reason for this is the lack of accountability. They are NEVER found to have been in the wrong - they ALWAYS walk. So there's really no incentive, in any case where there might be the slightest risk, to NOT kill. You get a paid vacation and then everything goes back to normal.

But it sure seems to me that this is not the role of cops we should want in our communities. If they don't want to assume the risks of police work they can sell insurance, or fix cars, or write code. It's an unusual job with unusual attractions for unusual people - and part of that cost/attraction is the risk, and the risk means keeping your goddam finger off the trigger until all other options are exhausted, not employing lethal force as the very first, last and only option in any case where the tension might be higher than usual...

You're right about the cowardice--one of the things that has bothered me most about the defense of this sort of killer is that the defense become "Well, he was afraid." But the conversation never really becomes about the proportion of fear, or how proportionate killing someone is to the actual risk at hand. That judgment about appropriate use of force, though, *has* to be the real point of the conversation, otherwise, we are excusing murder on the basis of whether someone...had a momentary surge of poultry manure in their veins.

Hi Vixen,
Happy Thanksgiving to you and your commentors. We're just kind of waiting around for Thanksgiving dinner. Just my wife and I this year. (We've decided to opt for a roast over the bird. Slow cooker, no muss, no fuss.)

I think this shooting is much more tragic than Michael Brown.

In the 60s we were divided into 3 main groups: the anti-Vietnam protesters (I was already a Vietnam vet so not part of that group); the consciousness expanding group (where I ultimately spent most of my time); and the civil rights group that I was very active in for a number of years.

Back in those days we had real shit going down. Black men being hanged by the side of the road, black people dragged from their homes and beaten.

Frankly if the only things we had to confront back in those days were criminal adjudications that had some ambiguity surrounding them there would never have been a civil rights movement. I'll simply say that this is not 1964 and Brown is not Medgar Evers.

And that is why I say that this kid's death is much more tragic. He really was innocent.

I think that mikey's view of the police is somewhat idealized. The same old timey cops he refers to were some of the same cops beating innocent black people into insensibility, and the same cops who did everything in their power including violence to stop us in the civil rights movement.

Moreover, although I prefer revolvers personally, you cannot very well expect the police to be using six-shooters when organized drug traffickers are carrying semi-autos that carry 17 and 20 rounds in the clip. This easily leads to what is known as fire suppression. If you have a six-shooters and someone has a Beretta-17, he can just keep shooting and walk up on you and shoot you while you're lying there trying to reload. If there are a couple of them, you're dead meat.

Today your average cop has a .40 caliber Glock and the drug dealers practically have close air support. (And naturally the Bloods, the Crips, Hispanic gangs, the Gangster Disciples, and plenty of organized criminal activity that isn't all white. Then we have plenty of violent criminals that are multi-cultural and accept member of all races. It's a wonderful thing.)

The escalation in weaponry and the tactical advances have largely been caused by confrontation with the drug trade.

I find all this troubling. We're headed towards what is called “Israeli style policing.” Which is a very aggressive and military style necessitated by having terrorists and enemies everywhere.

In Israel even school teachers are allowed to carry weapons. The threats we face from an escalation in outlaw and terrorist weaponry is pushing more militarism in our civilian police units and an accompanying defensive mindset.

The gracious and lovely Alicia decries small towns having SWAT teams where there is clearly no need for them.

There is always the desire to find culpability when a tragedy occurs. However, there is also a category of tragedy without any culpability. The only way to diminish the escalating militarism of police departments is to diminish violent criminals and terrorist activities in the United States. Naturally you can still find cases of injustice perpetrated by cops, and sociopaths are in every profession, even shrinks. However, compared to the old days it's a piece of cake when dealing with racial issues.

My advice to you, Vixen, is to get a good quality .32 caliber or .380 which would eliminate a lot of the recoil you don't like with your husband's .45. And maybe ask some of those cop relatives of yours what they think about all this.

Happy Thanksgiving (or Black Friday Eve) to you and yours, Formerly Amherst. We did Thanksgiving here just me and the spouse ourselves, since he had to work early (he's a meat-cutter, so this was a busy week for him) and wasn't up to socializing. I just roasted some turkey legs and sweet potatoes to be semi-traditional.

From what I can glean from my relatives, there's almost a kind of "we don't know what we don't know" about a case like Ferguson. I've heard stuff about the Philadelphia police force back in the '60's and '70's that seems similar to me to how Brown got shot. They don't know what happened, but they understand what could have, if that makes sense.

Criminology is an interesting thing to me--we've had, in general, a decrease in most gang crime from its hey-day in the crack-fueled 80's and early 90's. A certain amount of property crime seems to have gone down, too--and in part, the high incarceration rate we have in this country (getting people off the street) and militarization of police in part may have worked as deterrent forces.(An idea I'm obviously uncomfortable with because it deprives people the ability to get back on their feet with respects to carceralization, and because the militarism takes us well away from the image of the beat cop with strong ties to the community that we see in old shows like Dragnet and Adam 12-you know, the Officer who is not out to get you but really wants to protect and serve. They still exist, though. It just takes a special kind of person.)

Some things have made it a lot harder to be a criminal, in general--technology. Things like identity theft and bunco are harder to pull on people who have a basic understanding of how to protect themselves. People are opting to alarm their homes and have weapons for self and home defense.) The harder it is for the criminally-minded to get a dividend out of the enterprise, the more likely a legit job with benefits starts to appeal. I think that's why crime went down even during a recession the past ten years, say. You can't pluck a chicken that's already plucked. You can't pick empty pockets.

In Philly, our gang history seems to have been pretty ethnically diverse, but self-segregating. As our neighborhoods erode and gentrification comes about though, those ties also erode. More diverse neighborhoods seem to dilute that activity. (Even though it "ghettoizes" people who cannot afford the newly renovated areas and forces some people into crappier living conditions.)

But what I will say is--those who seem to flourish at it are the really committed, better armed, and "giving no fucks" types. You get a more hardened violent "not taking me alive" mentality from the criminal careerist. But I think there has to be some cognizance on the part of a peace officer that this encounter with truly dangerous bastards, even though it's the worst case scenario--it isn't the most likely encounter.

With respects to Alicia's concern about SWAT teams where they aren't needed, I recall having a lively conversation with a small-town friend about the purchase of the local fire department of a ladder truck that went seven stories--for a town where no structure actually went more than five stories. We wondered if they were operating on the "if we build it, they will come" philosophy. I know there is grant money that municipal budgets can get from the state or federally for such things, but I'd fear a "if we build it, they will come" philosophy for, say, tanks (well, up-armored Humvees, but very nearly tanks). An uptick in the local crime scene ought not to be viewed as aspirational, to say the least.