Brittany Maynard Made A Choice 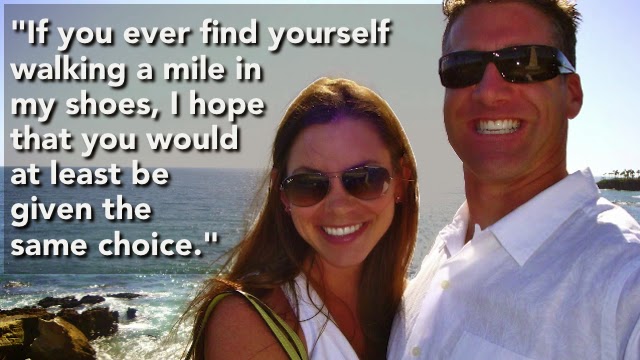 I think one meets the news of the decision of a person to end one's life when faced with a terminal diagnosis with a kind of sadness, naturally--death is, so far, our common fate. But I think that she had the freedom to determine the timing of her end a merciful thing. She had laid out very well her reasoning behind this decision. Her time, and more importantly, to her, her still-lucid and not dramatically impaired and reduced life, were going to be taken from her anyway. She chose the path that let her family come to peace with the hour of her choosing, that gave her control, that spared her and them seeing a bitter and painful decline.

To my way of thinking, if her life was not her own to do with it as she would, why would she be entrusted with it? If anyone gives a gift, one expects the recipient to do as they would--or the gift was never truly "given". If we are to have anything like free will at all, ending our lives is also a choice. One that has no continued consequence for ourselves this side of the veil, only continued bill-paying and meals and remembrances for those surviving in our wake.

The argument against her choice is, by now, moot, but still, fairly dumb. I feel bad calling up the yammering thing that is still called Pat Robertson (I think his mind may have already gone over the hill to meet the fairies, himself) to point out the dumbest argument, but here it is:

Pat Robertson said that the “culture of death” created by “so-called liberals” was to blame for the Oregon law.

“You want to pressure somebody? And you say to them, would you like to run up huge bills and burden your loved ones? Wouldn’t it be easier just to leave this world?” the TV preacher continued. “The culture of death is so pervasive, and the pressure to end the life of these people, it is really tough.”

In the end, Robertson argued that the best choice for Maynard and others was to “leave these things in God’s hands.”

Did you know that everyone dies? Everyone.  The terminally ill are diagnosed as dying soon-ish. The newborn are, in the own way, growing with the expectation of eventual death. We are mortal. Whatever our gifts, dying is what we are born into. Pat Robertson will die. I will. You will. Is he genuinely trying to say it is better to slide into dependency upon palliative carers schlepping bedpans and drugs about the biological mass that once held infinite probabilities and now has a steadily reducing timeline? Leaving family with the memory of that slide, and the near-misses with the Reaper, and ever more intrusive and undignified interventions by medical practitioners against the actual, sheer invincibility of that eventuality we are all careening towards?

Fuck a bunch of that. She did it her way, and she was welcome to it, and I pass a lot of judgment on anyone who wants to say her life wasn't hers to give up.

Of course it was. I honor her decision. Life is precious and death is real. We don't have to like the latter, but it is.


Posted by Vixen Strangely at 9:28 PM

Hi Vixen, I can promise you that you will never be more dead than you are right now. Which is to say that for many of us, the realities of life beyond the physical vehicle are both personal experience as well as decades of scholarship.

You might be interested to know that the Stoics vehemently believed that it was part of an individual's freedom to lay aside their physical life when they, based on their own judgement, decided it was time. The most famous exponent of Stoicism was Marcus Aurelius, and his book Meditations was the bedside reading for British high-level military and civilians when conducting the world war.

It is said that you can be a Stoic and simply deal with things in your control, forgetting about the rest. Or you can be a Platonist and focus your attention on the celestial mysteries of forms and archetypes being undisturbed by temporal ramifications. Or you can be a Hedonist and live for what gives you pleasure, abandoning all thoughts and concerns of different kinds of pain. Stoicism is not a bad choice, and the Hedonists and Epicureans' great pleasure was mostly thinking about philosophy. It is a shame that their philosophies have been co-opted by gastronomical concerns.

Carl Jung said: "Despite the materialistic tendency to understand the psyche as a mere reflection or imprint of physical and chemical processes, there is not a single proof of this hypothesis. Quite the contrary, innumerable facts prove that the psyche translates physical processes into sequences of image which have hardly any recognizable connection with the objective processes. The materialistic hypothesis is much too bold and flies in the face of experience with almost metaphysical presumption. The only thing that can be established with certainty, in the present state of our knowledge, is our ignorance of the nature of the psyche. There is thus no ground at all for regarding the psyche as something secondary or an epiphenomenon; on the contrary, there is every reason to regard it, as least hypothetically, as a factor sui generis, and go on doing so until it has been sufficiently proved that psychic processes can be fabricated in a retort."

Moreover, the esoteric point of view flies in the face of all of the current popular theories. The esoteric view is that the incarnating personality takes many decades to completely establish an association with the physical vehicle and the physical mind. There is a process of maturity that allows for more of the transcendental entity to become associated with different physiological and psychological processes.

We do not believe that the child becomes a person only after acquiring some consciousness from nature or nurture. Nor do we believe that the child becomes a person from conception. We regard it a metaphysical naivety to be bound by theories that fly in the face of thousands of years of traditions and teachings and understandings that go back to the beginning of time.

By and large we've all been here before and have a high probability we'll be here again. And ultimately all is weighed in the balance, the feather of truth upon the scales. We will all stand in the light of the tarot card Judgement, an illumination so bright that no deception can be hidden.

In the words of the magical motto of one famous adept, "Shatter the lamp, the light remains!"

I take a look at a decision like Maynard's--being already near the end of her life, with an interest in sparing her family further pain and in maintaining her lucidity towards the end, as being basically in the model of a Stoic ending--I think the possibility of losing that which makes up one's mental self is what can strike one as particularly horrifying to face--especially knowing that it draws out the dying for one's family as well. I see this type of death as having an intentionality far different than that of, say a lovelorn young person flinging their life away on impulse.

Hi Vixen, I can promise you that you will never be more dead than you are right now.

Yes, but consider the company I'm in! Following the thought of Lucretius the Epicurean, there's nothing to cling to in life and nothing to be feared in death. I think it is a shame Epicurus isn't better known--he taught against fear of imaginary crimes and that death can also be a consolation. His reputation for hedonism is rather overstated--Epicureans recognized the importance of moderation; the result of seeking out "kicks" for their own sake is, unfortunately, a kind of anhedonia. But his material line of thinking has been influential for natural science and utilitarian ethics.

Regarding the bardo--the ancient schools prepared people with images to guide them beyond death, which is why even spiritual people might prefer having some mental preparation or expectation about the moment of their passing. Allowing that metempsychosis has some plausibility for me (some of my life would make sense in the context of having "prior engagements"), seeing suicide as an escape is obviously not really possible--one changes one's situation, but doesn't get free from oneself.

At the risk of seeming glib, I'll say one thing for the Akashic Record--it's neigh impossible to cancel your subscription, and they always seem to know where to deliver your bill.