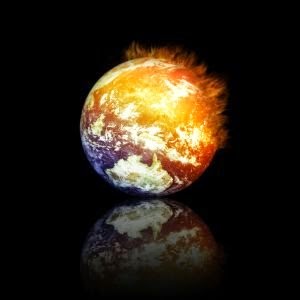 We are, for the most part, inured to the idea that the earth is warming--I should expect by now, unless you are in some hopeless denialist state that even I can't reach. In which case--why are you even at my blog? Shoo!

But here is the problem we're butting up against--our carbon output is cumulative and endures long after we stop dumping it into the atmosphere. So there is a very real probability that the climate impacts of doing nothing, which is basically the current strategy if you look at it in the right light--are irreversible.

See, there are technologies like solar panels and wind farms that we have right now that, if massively implemented, would be sustainable energy sources that don't contribute to carbon output. It's actually within a plausible thought that governments could agree to implement technologies that reduce greenhouse gas outputs. Our weather might be kinda jacked-up in the short run, but in the long run, we have lots of species on this planet surviving that might not have. That would be a good thing.

But since we are stupid as a species we elect people who deny science and common sense.

Upshot? If you care about the environment at all, think lesser evil please? Thanks.
Posted by Vixen Strangely at 10:14 PM

If you care about the environment at all, support a return to the 50 State election strategy.

Running right-wing Dems and expecting your base to turn out because they have no where else to go isn't getting it done. Except for the cynics collecting the corporate payola, of course.
~

What is happening is over time we are reducing the human population that the earth can sustain. My guess is over the long term, even 5-7 billion is probably not sustainable in terms of resource depletion, environmental and habitat destruction and food production.

But now much of the geographic locations where a large percentage of the population lives will be inundated, or will be desert, or will be unable to produce agriculture at a sufficient level of productivity.

So yes, in a very real sense it is too late, the changes are irreversible. But the net outcome is there will be a few billion people who can live perfectly good lives in even the most carbon enriched atmospheric environment. Once all the wars, famines, disease and pestilences have passed, and we've gone through a six or seven billion person die-off, the earth will stabilize with a much smaller human population.

In a hundred, maybe a hundred fifty years, a geologic blink of an eye, and this will all be behind us...