Voting Works--This Is How I Know 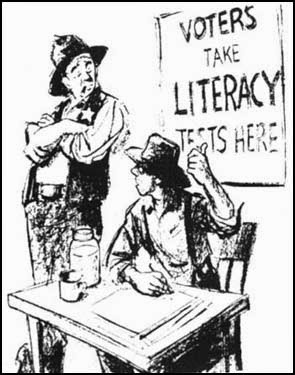 It was Emma Goldman who said "If voting changed anything, they'd make it illegal."

Hm. It wasn't legal for women to vote at one time, and women marched and starved and were punished for wanting representation. It wasn't legal for slaves to vote, even if they were a significant population at one time. Laws were passed to prevent, or at least narrow, the option to vote for certain populations--and this practice of outlawing certain votes still exists.

Don't look now, but I do believe voting does something, because even now, people are trying to make it harder for people to vote. They want to restrict access to voter ID's even while making a valid ID essential to being able to participate. They want to drop people off the rolls for some statistical reason that seems an awful lot like "We don't like your kind."

Greg Palast has done a great amount of work documenting the way that votes are being trashed--and his recent story is a tragedy of our democracy. Could you be dropped out of voter eligibility because you have a common name like "Robert Brown" and live in a district mostly African-American? Well, maybe your vote gets discounted for that very reason. In Georgia, 50K voter registrations have gone astray--that's craziness.

Voting--you bet your ass--does matter. So I would say--vote like your country and its future depended on it. I know this past month I've got maybe 70 or so deletable "begs" in my email inbox every day for money by this PAC or that--let me do the one thing I can--

Just fucking vote, people. Vote for someone good, or against someone bad, but at any rate, let your real opinion be heard. Because not voting actually sends no message at all.
Posted by Vixen Strangely at 12:23 AM

But one thing that also plays into the whole voter suppression program is America has a voting fetish. America, in all its low-information short attention span glory has come to equate voting with 'democracy', as if a free and fair election was all that was required for a free nation.

So they put no emphasis on building and sustaining the underlying democratic institutions - they work to co-opt the judiciary, they undermine those entities that write the 'rules of the road', they seek to use blatant coercion when legislation doesn't get them what they want.

Mikey and V.S., the Republicans couldn't have done what they've done over the last thirty years without the Republican wing of the Democratic party being a corrupt participant.
~

I'm just saying the reason your (and my) choices are so lousy is because the GOP wing of the Democratic party is on the con.

And if we don't recognize that, we're always going to be the marks in the game.
~

By which I mean: Tell people to vote?

Also tell them to support a return to a 50 State Strategy.

All the votes in the world won't get a Democratic congressman in FL-27. Because our right-wing DNC and DCCC chairs didn't want a challenger to their good friend, gooper Ileana Ros-Lehtinen. Not in 2008, 2010, 2012, or now.

Even though FL-28 is increasingly blue.
~

I'm just saying the reason your (and my) choices are so lousy is because the GOP wing of the Democratic party is on the con.

I am in agreement with that--I think, even in states where there's a tough contest, there should at least be some kind of fight, and even if a state is undeniably conservative-leaning, there is a definite benefit in actually presenting a real choice instead of just running a "low-sodium" conservative option. "Tastes great, less filling" markets beer, not political candidates, but that's how some blue dogs come across to me.

Putting up a fight and presenting a choice is why I'm pretty impressed with Alison Grimes for KY Sen and Wendy Davis for TX Gov. Sure, there's regional shibboleths they have to deal with, but they are running as Democrats. (I could nit-pick about Grimes pussyfooting over whether she voted for Obama, but meh.)

I don't think there's an excuse for not even trying in, say, blue-state NJ to unseat even a popular governor. In any martial art, taking falls and punches is part of the training--ditto politics. Sure, some contests are tough, but I'm for slugging in all of'em. Even if it means eating canvass sometimes.

Not often you get to beat Emma Goldman in a fair debate, but you clearly win this one.

Hi Vixen, I'm now a week into physical therapy and assume it will be about 3 months of work before I have a good use of my right arm and probably a year before I can throw a top-notch right hook. I really just drug Alicia in here to say Happy Samhain, but I might as well address your topic a little.

It's interesting to me on the Republican side we decry RINOs whom we regard as Democrat-lite, and you guys apparent feel that a large number of Democrats are just Republican-lite. And we both are frustrated by the same kinds of issues with our politicians, only in reverse.

You know, it's kind of interesting that in the Queen scale of the Qaballistic Tree of Life, Geburah is red and Chesed is blue. And surprisingly enough, here in the US this pretty well depicts the different positions of Democrats and Republicans. Republicans are red, and Democrats are blue.

Chesed is seen to be sort of like a cosmic whipped cream dispenser. It will dispense largesse, automatically and uncontrollably flooding the cosmos with fulfillment of desires. And if there were no fulfillment of desires, it would be a grim universe. As a consequence Geburah then acts to restrain the unbridled beneficence of Chesed. The cosmos has to provide a way of checking the outward flow of generosity lest we all be drowned in goodness without limitations.

From the Golden Dawn's chapter, "On the general guidance and purification of the soul:"
"Do good unto others for God's sake, not for reward, not for gratitude from them, not for sympathy. If thou art generous, thou wilt not long for thine ears to be tricked by expressions of gratitude. Remember that unbalanced force is evil, that unbalanced severity is but cruelty and oppression, but also unbalanced Mercy is but weakness which would allow and abet evil."

Perhaps the fight that you would like Democrats and Republicans to have is the alchemy which would allow a balance from Tipareth to assert itself from the unbalance of Mercy and Severity. Of course this would be ideal, and most of the time we just lurch from one unbalanced force to another unbalanced force, seldom achieving a Tipareth balance of beautiful harmony.

Anyway I will say that however Democrats fare in this coming election they will have earned whatever they get. And if things do not go well for them, the president is ultimately the one who is most responsible. He has created an inevitability of backlash by policies that were not designed to weave themselves between the contending parties to find some kind of accommodation.

And I would say--Republicans get their share in whatever transpires--because our conversations about karma aren't much lost on me. If Republicans were to get hold of the Senate, they own everything they do from that point, and can no longer say the collusion between Harry Reid and the White House held them back from anything they chose to accomplish. The funny thing with me is I lean toward Geburah--I'm as judge-y as they come as a social critic, and I have the stinging tongue of a retaliator. But my party is associated with Chesed--so I question it a bisseleh.

The thing is, I know many of my party would greatly prefer the people who receive hand-outs, get hand-ups in the form of useful and gainful employment. And yet, the major employers have become used to the system backstopping their low wages by supplementing their occasional layoffs with unemployment insurance and their everyday low wages with low-income food, utility, and housing resources.

This system of letting corporations get by disrespecting the wage-earners and leaving them to the mercy of government is supported by the Geburah folks, who don't mind lashing the unfortunate (who are always with us, the good news is, to wait tables and pick tomatoes) with judgment of being lazy for not getting more than...their employers will suffer them to receive. In the meantime, their employers are noble for even giving them the position to help them get profits in the first place. Republicans seem truly solicitous of this pose with respect to those holding the means of wealth-creation--even while they withhold that same ability to create wealth from others.

As a proper Marxist, I like my dialectics--a blending of Chesed and Geburah into a synthesis in Tipharet is my aspiration. I think an elegant formula for good government can exist, not as a platonic ideal, but as a matter of fairness when all parties get equal and just representation. Which is why I am for all individuals voting to co-create a government closer to our desires.

I still consider democracy as Lincoln put it--an experiment, and to hearken back to my opinion of the forefathers who were likely to be Freemasons, an experiment in Tikkun.

Isaac Newton, who followed science and the great path, considered his ability to see farther than others, the result of standing on the shoulders of giants. Our politicians today should stand on the legacy of the past. Build on our successes. Pass on a great tradition. Bowing to the media and offering platitudes is a poor occupation for people who might need to make strong decisions about how folks get along.