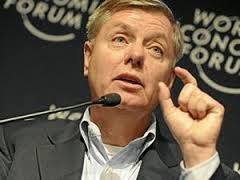 Sen. Lindsey Graham has gotten a bit of attention because of a sort of stand-up bit he did at an all-male club (the Hibernians) where he said something a little awkward:

File this under "Why Lindsey Graham Probably Isn't Going to Run for President in 2016." Not that there needed to be more evidence, but comments he made to an all-male club about how it would fare under a Graham administration are a pretty good reminder why Graham isn't really the guy for the GOP in 2016.

"If I get to be president, white men who are in male-only clubs are going to do great in my presidency," Graham said.

Yeah. See it is kind of funny because it's true, as the saying goes, but it's also not funny because it's true. You know, to the people who are not white and would not be eligible for any male-only club. It's funny/not funny, because he's the guy who kind of bluntly admitted that there are only so many "angry white guys"--and their numbers can't keep the party afloat.

But the thing of it is, I have no doubt any GOP presidency would be really good to white guys in all-male clubs.

This has a lot to do with why I vote solidly Democratic in the first damn place. Not because I have issues with the white males, oh no--some of my best friends, husbands and near-kinfolk are white and male. I just have this weird thing about the GOP not recognizing other people exist or acknowledging their issues and causes. Or actively denigrating them. So, I'm  not finding that a laugh-line--and his party shouldn't either.
Posted by Vixen Strangely at 11:46 PM