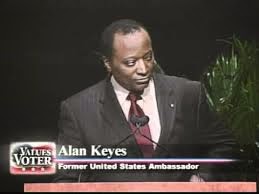 In my post below, I mentioned that Nick Muzin's joke didn't really work as a joke because, as I keep saying, ebola is serious business. But on a certain level, it should work. After all, who could take a contention that Obamacare and ebola are somehow connected seriously?  That's just absurd...right?

And then along comes Alan Keyes:

The Obama faction’s plan to import Ebola-infected persons into the United States maintains the outward appearance of and unarmed invasion while in fact introducing into the country what amounts to specialized “armies of one,” each of them carrying a biological weapon of mass destruction. If and when the resulting infections get out of hand (which seems to be happening despite repeated, apparently erroneous, possibly deceitful, assurances of effective containment) what will be made of the resulting health crisis? When, by way of this sly biological warfare, “Obamacare” morphs into “Ebolacare” what will become of the (always suspect) commitment of Obama’s ostensible opponents in the GOP’s elitist faction leadership to roll back the government takeover of the health sector?

You know, bringing people infected with ebola into isolation rooms to be treated so they get better is probably one of the least-effective means of using what is already a piss-poor bioweapon (sorry/not sorry, Mark Thiessen) I can think of.  Spreading ebola to make Obamacare look good is...special? Does Keyes actually believe something this dopey? That is below the credibility threshold for a comic-book villain.

Oh, and people buy private health care plans on the exchanges. It's really not a takeover of healthcare. That's like saying "Stop" signs  and the DMV are a takeover of traffic.

It might work as satire, in a Daily Currant kind of way--but this is a real person really saying this thing! How do you parody that?

Posted by Vixen Strangely at 8:30 PM

Well, Alan Keyes is a very special kind of dishonest/crazy - kind of in the Bachmann category - for the most part they squandered this line of attack at least five years ago. By blaming every single fucking thing that happened in the world on Obama, by spewing spittle-flecked 'outrage' at Obama over a new event every news cycle, no matter how convoluted, irrational and ultimately unbelievable the case had to be to 'work', at some point they lost all credibility.

Oh sure, there's the 28%ers who don't know any better, and who even more importantly don't WANT to know, but to whatever extent there really are people who can be influenced politically, this endless drumbeat of manufactured claims and outrage is driving them right into the Democrats waiting arms...