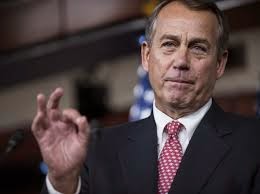 I sort of thought this was a parody, but no:


"Does anybody think that Vladimir Putin would have gone into Crimea had George W. Bush been president of the United States? No!" Boehner asked, and answered, before a group of Republican volunteers here.
"Even Putin is smart enough to know that Bush would have punched him in the nose in about 10 seconds!" Boehner said to an applauding crowd.

Does everyone remember when Putin went into Georgia and did not get punched in the nose? Right.

But he sure said it out loud where uncritical people could hear. Yeah, clapping people--he knew you'd like that one. Uncle John is full of stories. Pull his finger...you can hear where his lawsuit against the president went.
Posted by Vixen Strangely at 10:42 PM

Yeah, know what? The odious GW Bush actually WAS stupid enough to start a superpower war in Europe over Crimea. Why NOT risk getting 10 million people killed for that?