Rick Santorum Misses Every Point About WMD's in Iraq 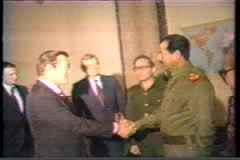 My former senator, Rick Santorum, followed up a bit on the NYT story recently published regarding the aftermath of US troops exposed to aged chemical weapons in Iraq with a column in The Daily Beast that seems genuinely mystified about why the Bush II Administration didn't tout the existence of these weapons to the rafters.

This mystification is quite odd. The information itself was part of the earlier ISG report. There were news stories; it's not like it was "hushed up"--it just wasn't advertised. When my Rumproast colleague Bette Noir posted regarding the "WMD truthers" following in the wake of the NYT story, most of us jaded commenters were like. "And this is new?"

We don't even really need to point a finger at conveniently Machiavellian figure Karl Rove to figure out why the existence of very old chemical munitions in Iraq isn't actually supportive of claims that included yellowcake uranium, nuclear centrifuge tubes or whatever the hell other "smoking gun/mushroom cloud" rhetoric was being used circa 2002-2003. Because the Defense Department told then-Senator Santorum as much when they responded that these were not the munitions that the case for the Iraq invasion was built on back in 2006 when he hyped these claims at the tail-end of his dramatic losing campaign.

In the long-running war against Iran during the 1980's, Iraq originally used mainly Soviet weapons but eventually acquired some rather good sources of US-make materiel. This build-up was winked at. And then along came GHWB and his need to not be a wimp. From 1991 to 2001--are we really saying Hussein should have known where every bit of munitions were anymore? We set a real high bar--but don't forget--the US pulled weapons inspectors just before invading, interrupting the process that might have found them anyway. But still and all--this is no Jedi mind trick--these are not the WMD's we were looking for.

Now, that Santorum (I can't be arsed that Pete Hoekstra is also on the byline because who else gives a rip?) wants to hype intel that is irrelevant now anyway and was dead-in-the-water for him in 2006 to, I'm thinking, build up foreign policy cred for 2016 as if he were right all along is, so, so like him. But that is the point. It's him. He still thinks this is the info you run with. He's wrong, but sincere. Sincerely wrong. And cannot be told otherwise. And that last bit? That's the disqualifier.

Posted by Vixen Strangely at 12:05 AM

The question in the runup to the Invasion and occupation of Iraq in spring of 2003 was simply this: Was Iraq a threat to the US? The foul GW Bush administration was using America's generalized freakout from watching the towers fall in '01 to leverage all the policies they wanted to implement, so everything they sold was marketed in terms of it being a 'threat' to America. Everyone knew that Iraq had stockpiled and used CW such as Mustard, Sarin and VX, both in the war with Iran and against their own people, most notably in the Anfal Kurdish genocide. But those weapons were not interesting to team Bush, because they wouldn't actually scare anybody. So everybody ignored 'em, they made a bunch of people sick and even today ISIS is losing a few Jihadis a week screwing around with expired Organophosphorus.

Also, despite UN Resolution 687, which had its own agenda, CW are not in any way a WMD. They are a potent, if difficult to use battlefield weapon, and a superior terror weapon, but in no way are they useful as a weapon of mass destruction...