Donald Trump Would Leave Americans Behind. 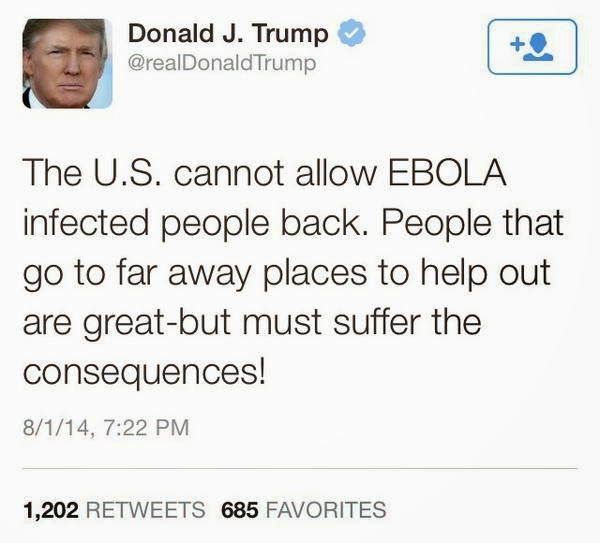 For those who can't see the graphic, Donald Trump (The Donald) tweeted: "The U.S. cannot allow EBOLA infected people back. People that go to far away places to help out are great-but must suffer the consequences!"

What a bloody noble bastard he is, right? No good deed goes unpunished!

He's speaking, of course, about the decision to have Dr. Kent Brantly and Nancy Writebol (Americans who heroically risked their lives to assist with the Ebola crisis in West Africa) come back to be treated here in the good old U.S. of A. You know, where we have a funny old ethos about valuing human life and not leaving heroes behind if we can help it. Usually. Unless icky germs and human suffering might be occurring--if you're a privileged ignoramus like Trump, who has been bloviating about the risks in a nice public snit about how "leaders" are crazy to want to treat sick people.


If there were a global pandemic, it really might behoove us to know something about treating this illness, would it not? That's not so crazy. From a humanitarian point of view, saving human lives because this disease can be beaten is not crazy, either. And of course, Trump is a public spectacle of walking derp, from his Birther flirting to his weird obsession against windmills, and it's probably just silly of me to point out that he's, once again, flagrantly wrong and fact-averse.

Except that people take this guy seriously enough that his name was bruited about for a presidential run once upon a time. So I would very much like to point out that he's uniquely unqualified, not just because he doesn't bother to know things, like the state of the art care that a mere two Ebola patients can be given in isolation here as opposed to the over-taxed situation they would have been in if left where they were.  And we've dealt with this kind of infection before here in the states. It's not an "end of the world" scenario. It is medical treatment of people in real need that we probably can help--two of them. Two heroic American people.

It's because he would let them die, because ugh. Diseases are gross. This is the thinking of an immature, selfish person at best. You know who else goes to "far away places to help out"? Like, diplomatic staff at consulates and embassies. Our soldiers. Suffer the consequences? Trump suffers the consequences of being Trump, but maybe he could stand to go off to a faraway place for awhile! In other words--anyone still interested in his political future should take a hard look at...this.

Posted by Vixen Strangely at 10:32 PM