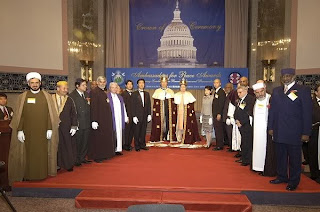 The Rev. of the Unification Church was something of a hybrid religious/political/media figure, in that he was a cult leader, a big contributor to mostly Republican candidates for office, and owned the Washington Times newspaper. He also owned a pretty big corner of the sushi market in the US. Anyway, he isn't doing anything anymore:


"Our True Father passed into the spiritual world at 1:54 AM Monday, September 3rd, Korea time," a message on a Unification Church English-language website said.

"Words cannot convey my heart at this time," Thomas P. McDevitt, the Times' president, said in a story on the newspaper's website. "Rev. Sun Myung Moon has long loved America, and he believed in the need for a powerful free press to convey accurate information and moral values to people in a free world.


I think the weirdest story about the Rev. Moon I ever heard about was the crowning ceremony in 2004 held at the Dirkson Senate Building:

On March 23, the Dirksen Senate Office Building was the scene of a coronation ceremony for Rev. Sun Myung Moon, owner of the conservative Washington Times newspaper and UPI wire service, who was given a bejeweled crown by Rep. Danny K. Davis, D-Ill. Afterward, Moon told his bipartisan audience of Washington power players he would save everyone on Earth as he had saved the souls of Hitler and Stalin — the murderous dictators had been born again through him, he said. In a vision, Moon said the reformed Hitler and Stalin vouched for him, calling him “none other than humanity’s Savior, Messiah, Returning Lord and True Parent.”

Yes. That is very weird. But it was bipartisan weird, I guess.  There's a video, too.

There really doesn't need to be another one like him.


Posted by Vixen Strangely at 8:35 PM